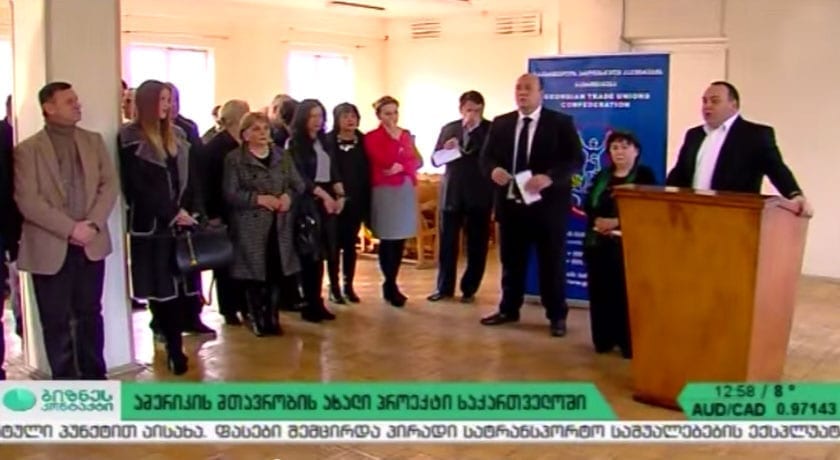 A new Solidarity Center project in Georgia to strengthen respect for worker rights through union, government and employer engagement will ensure the voice of workers is “a critical part of policymaking” so that “the benefits of economic growth are shared,” says Solidarity Center Executive Director Shawna Bader-Blau.

The Georgian Minister of Labor, U.S. and Georgian government officials, diplomats, nongovernmental organization (NGO) representatives and leaders of the Georgian Trade Union Confederation (GTUC) launched the three-year venture, Strengthening Worker Organizations in Georgia, on March 4 in Tbilisi, the country’s capital. The project is funded by the U.S. Department of Labor and will be implemented by the Solidarity Center in cooperation with the GTUC.

Speaking at the launch, GTUC President Irakli Petriashvili said, “​It is very important that the international community keep an eye on any violations aimed at employees.”

“Ultimately, the project, which will build on recent improvements in Georgian labor law, will lead to greater compliance with national labor law and internationally recognized norms and standards,” including the right to form unions, says Stanislaw Cieniuch, Solidarity Center Georgia program director. “Over time, these and other measures will contribute to building a modern, cooperative system of labor-management relations.”

The city’s metro transportation hub, the site of the launch event, was chosen because it is a workplace “where workers and employers have come together in a commitment to decent, safe and productive employment—through collective bargaining,” says Bader-Blau.