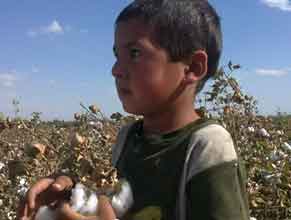 And 5.5 million is the number of signatures the nonprofit coalition End Child Slavery Week is seeking on a petition urging the United Nations (UN) to step up its focus on child slavery in the world body’s Sustainable Development Goals (SDG). The SDGs map the desired direction of member countries for the next 15 years.

The signatures will be hand-delivered to UN Secretary General Ban Ki-Moon as part of a broader campaign to revise the SDGs to incorporate a sharper global focus on addressing all forms of child labor, including enactment of appropriate laws to set and enforce a minimum age for employment, and measures to ensure that children go to school.

Help the campaign reach its goal: Sign the petition now.

“The number of child slaves has remained constant in the last two decades,” says Kailash Satyarthi, who won the Nobel Peace Prize this year for his work as a child rights’ activist. Child labor is a “largely neglected, ignored, denied aspect of human rights. Governments are saying they don’t have child labor” but “these children remain hidden behind the demonstrations of progress and modern images of government.”

In 1998, Satyarthi created the Global March Against Child Labor, a coalition of unions and child rights organizations from around the world, to work toward elimination of child labor. Global March members and partners are now in more than 140 countries. Many of these civil society groups, including the Solidarity Center, came together this year to launch End Child Slavery Week, focusing on improving the Sustainable Development Goals.

The mass mobilization campaign around the petition will ramp up November 20–26 with a week of public education focused on child labor and trafficking.

Part of the education process involves making the connection between jobs that do not pay living wages and the subsequent need for parents to take desperate actions to support their families, such as sending their children to work, says Satyarthi. If workers had the ability to freely form and join unions to improve their working conditions, they could improve their wages and support their families, he says.

“If parents can’t buy for themselves, how can they buy for their children?” he asks.

You can get the word out by signing and sharing the petition and through Facebook and Twitter @ECSWeek with the hashtag #endchildslaveryweek.