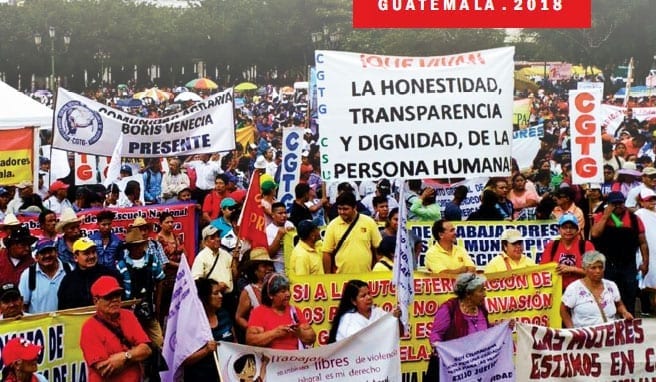 At least five union activists were murdered in Guatemala in 2018, and union leaders and members in Guatemala and Honduras suffered dozens of incidents over the past year for standing up for worker rights, including restriction of union rights, intimidation, harassment, illegal detention, death threats and attempted murder, according to two new reports.

In Guatemala, union leaders and members reported 882 crimes to the Office of Crimes Against Trade Unionists, including coercion, kidnapping and murder. Yet there were only two convictions, according to the Annual Report on Anti-Union Violence in Guatemala. Incidents against union activists in Honduras were concentrated in the department of Cortés in northern Honduras, which includes the major industrial city of San Pedro Sula, as well as a key agricultural area where banana and palm plantation workers are struggling to win decent wages and working conditions.

Both reports recommend that unions prioritize registering incidents of violence against union activists, incorporate gender analyses to prevent and demand protection from gender-based violence and harassment at work, and urge the governments to work across agencies and departments to prevent union violence, protect victims and end impunity. 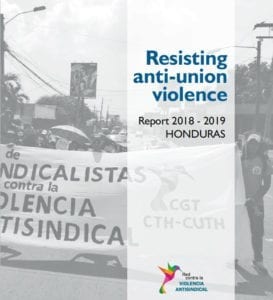 Union leaders in the area from the agro-industrial union STAS, the banana union SITRATERCO and other unions represented 26 of the 38 total victims of anti-union violence between February 2018 and February 2019, according to the report, Resisting Anti-Union Violence in Honduras. Women who were targeted often received threats against their mothers and children, the report finds.

The number of incidents of anti-union violence has steadily increased since the network’s first report, from 14 in 2015 to 39 in 2017, with one less incident in 2018. Union anti-violence networks in Honduras and Guatemala, supported by the Solidarity Center, annually issue reports documenting violence and intimidation against worker rights activists.

Agricultural worker activists represented 86 percent of the victims of anti-union violence in Honduras, a startling shift from past years, when state and public-sector violence against union leaders and activists represented a majority of incidents, according to data in previous reports. The remaining incidents in 2018 were directed at public employees.

“Stopping the systematic aggressions like those faced by STAS, SITRASEMCA, SITRATERCO and SITRAINFOP is an urgent responsibility for the state of Honduras,” according to the report.

The International Labor Organization (ILO) held back-to-back hearings at the International Labor Conferences (ILC) in 2018 and 2019 on Honduras’s failure to abide by its international commitments. The ILC report in 2018, which expressed “deep concern at the large number of anti-union crimes, including many murders and death threats, committed since 2010,” urged the Honduran government to protect vulnerable unionists, investigate more than a decade of unsolved murders of union leaders and prosecute those responsible for the crimes.

Among union activists murdered in Guatemala, Domingo Nach Hernández, a member of the Workers’ Union of the Municipality of Villa Canales, was found dead in June 2018, days after being kidnapped. Soon before he disappeared, the union had won back the jobs of several workers who were illegally fired. Hernández had previously received death threats and reported them to authorities, according to the Guatemala report.

Freedom to Form Unions Under Attack

In 2014, Guatemala overtook Colombia as the deadliest country in the world for trade unionists. Since then, the International Trade Union Confederation (ITUC) has consistently named Guatemala one of the 10 worst countries in the world to be a worker, in its annual Global Rights Index, with a rating of 5—“No guarantee of rights”—on its 5-point scale. Honduras is similarly ranked. Countries with a 5 rating are the worst countries in the world in which to be a worker. While they may have legislation that spells out certain worker rights, workers effectively have no access to these rights and are exposed to autocratic regimes and unfair labor practices, according to the ITUC.

Violence is widespread in both countries, but attacks on worker rights activists specifically seek to weaken or eradicate the unions and their work to build citizenship, both reports note.  Few perpetrators are brought to justice in either country, with only two convictions in 2018 for crimes against unionists in Guatemala, for example.

When workers seek to join unions and bargain collectively, violence is among the many obstacles they face, as employers harass and intimidate workers generally without repercussion, despite both countries’ stated support for worker rights.

“Freedom of association in Guatemala continues to be very limited, despite current legislation on human and trade union rights and the ratification of international agreements,” the Guatemala report states, noting that many worker rights activists who receive threats fear reporting it to the network for fear of reprisals.

With few jobs available in Guatemala and Honduras, workers in both countries are struggling to survive in the face of endemic poverty. According to the Honduran union anti-violence network, more than 2 million Hondurans live in conditions of “relative poverty,” while nearly 4 million live in “extreme poverty”—in a country with 9 million people. Some 80 percent of those who work are paid less than the minimum wage, the report says.

More than 70 percent of Guatemalans with jobs labor in the informal economy, with low wages, lack of job security and often dangerous working conditions. Nearly half of children younger than 5 suffer from chronic malnutrition, and almost 20 percent of the population cannot read nor write, according to the Guatemalan union anti-violence network, limiting opportunities for better-paying jobs.

The United States brought trade complaints against the governments of Guatemala and Honduras for failing to enforce their own labor laws under the CAFTA-DR trade agreement. The Guatemala case lasted eight years and, despite overwhelming evidence of systemic labor rights violations, an arbitration panel cited a lack of evidence that worker rights violations impacted trade. The Honduras complaint is still active, and the U.S. government is working with the Honduran government, employers and the labor movement on a worker rights monitoring and action plan.