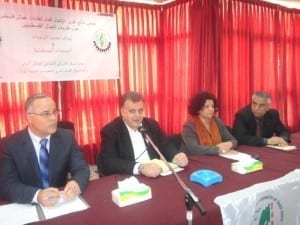 PGFTU leaders discussed the study, which found the majority of Palestinian workers are paid less than the minimum wage. Credit: Rami Khanfar

More than half of Palestinian workers—59 percent—earn less than the national minimum wage established in October 2012, and women workers are paid half as much as male wage earners, according to a new report. A large majority, 85 percent, of Palestinian workers do not have a written contract guaranteeing their conditions of employment.

“Palestinian Workers: A Comprehensive Report on Work Conditions, Priorities and Recommendations,” details the working conditions of Palestinians who labor in the West Bank, Gaza, Israel and Israeli settlements.. The report—based on surveys of workers in the West Bank, Gaza, Israel and the settlements—finds that fewer than half (47 percent) of working Palestinians have health insurance, while the majority (58 percent) say they risk physical hazards at work. The report is available in English and Arabic.

According to one worker quoted anonymously in the report: “Employers do not abide by the terms of the contract with respect to working hours. For instance, workers in the construction sector work all day from 7 a.m. to 6 p.m.”

The report also highlights issues faced by women workers, only 12 percent of whom say their wages are sufficient to cover their living expenses. Women also face workplace abuse, such as in the Jordan Valley, where working women say they suffer beatings, verbal abuse and humiliation by labor brokers who bring workers to Israel.

“Palestine Workers,” based on interviews with 1,000 workers (union and non-union members), representatives from the Palestinian General Federation of Trade Unions (PGFTU), employers’ associations and government, officials, was prepared by the Arab World for Research and Development (AWRAD) with input from the PGFTU and support by the Solidarity Center