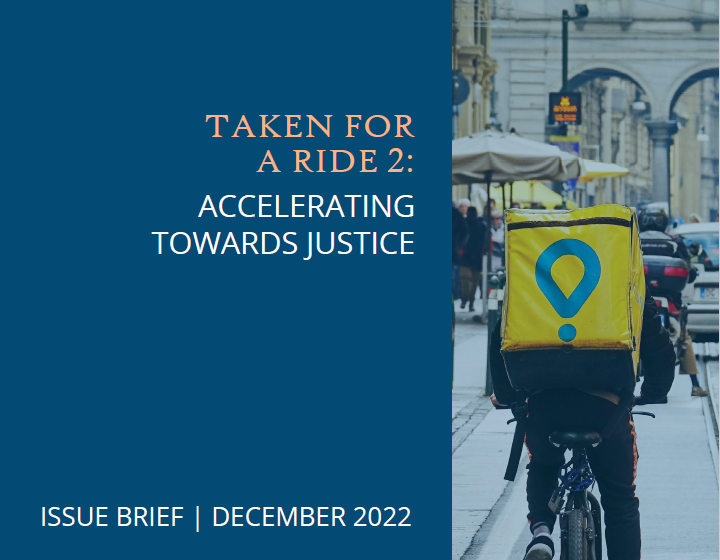 Workers on digital platform companies who are pursuing their rights at work through courts and legislation are making significant gains, especially in Europe and Latin America, according to a new report by the International Lawyers Assisting Workers Network (ILAW Network). 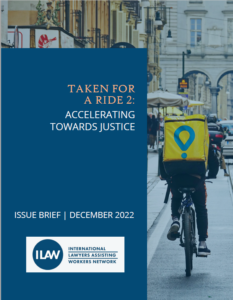 A key finding of Taken for a Ride 2: Accelerating Towards Justice shows that major companies like Uber, Deliveroo, Glovo and others often are losing in their efforts to intentionally misclassify workers, with Australia as an exception.

When gig workers like platform-based drivers are misclassified as independent contractors, they are not covered by labor laws that mandate a minimum wage, safety and health protections, paid sick leave, and the right to join or form a union and bargain collectively.

As the report notes: “The principal problem, the denial of workers’ employment status is not the sole issue when it comes to the exploitation of these workers. The denial of decent wages and working hours, unfair dismissals, and some union busting to boot, are all part and parcel of the [platform companies’] modus operandi.”

“The leading digital platform companies were well aware that their model was illegal from the start and used their money and influence to ensure that regulators would treat their ‘innovation’ otherwise. At long last, courts and regulators are coming around, though after undermining an industry and the livelihoods of drivers worldwide,” says Jeffrey Vogt, rule of law director at the Solidarity Center.

The Solidarity Center launched the ILAW Network in December 2018 as a global hub for worker rights lawyers to facilitate innovative litigation, help spread the adoption of pro-worker legislation and defeat anti-worker laws. The network now has more than 900 members from 80 countries.

The ILAW report analyzes 30 recent employment cases across 18 countries and builds on the network’s March 2021 Taken for a Ride report which found that app-based companies “go to extraordinary lengths to construct an impenetrable legal armory around themselves, requiring workers, unions and/or the state to overcome innumerable hurdles should they wish to impose any employment obligations on the companies acting as ‘employers.’”

Even as they advocate for laws ensuring their full rights as workers and challenge exploitative company practices in courts, platform workers also are standing up for their rights around the world by taking collective action to strike and form unions and associations.

Taken for a Ride 2 asserts that collective action is key to advancing their rights. In one of its key recommendations, the report states: “Independent, democratic trade unions and worker organizations which represent ‘gig economy’ workers must be provided a seat at the table. They also hold more expertise than legislators, lawyers and academics about what ‘gig economy’ workers need from the law.”

In addition, the report notes that enforcement of laws covering platform workers is crucial because “this is an industry in which employers have demonstrated over and over again that irrespective of what judges say, or the extent to which they are lambasted in the press, they are willing to flout laws unfavorable to them. Because the price of doing so has not been high enough.”