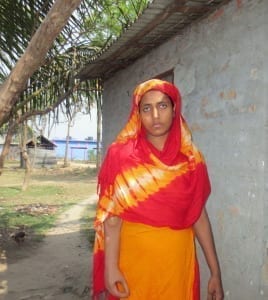 When the multistory Rana Plaza building collapsed on April 24, 2014, in Bangladesh, Moriom Begum was trapped for two days in the room where she worked as a sewing operator. Hunched in the dark, unable to move beneath a sewing stool and suffering from serious injuries, Moriom was surrounded by the lifeless bodies of her co-workers. As the long hours dragged by, Moriom thought, “I will never see the world again.”

Moriom, who had worked for more than three years at New Wave Style, one of five factories in the building, lost her right hand in the disaster and suffers from continuous pain in her wrist. She recently was fitted with an artificial hand, but she says “the hand is very heavy. “This hand seems like an extra burden for me.”

Like many of the garment workers in Rana Plaza the day of the collapse, Moriom and her colleagues didn’t want to enter into the factory. The day before, engineers had identified cracks so serious they said the building should be closed immediately. But many factory managers threatened workers, saying they would be fired if they did not show up for work the next day.

More than 1,110 workers were killed and thousands more injured when the building pancaked. A government inquiry concluded that substandard construction materials and the vibration of heavy machinery in the five garment factories were prime triggers of the building’s collapse.

Moriom, 30, came to Dhaka, the Bangladesh capital, five years ago to provide her for her children. A single mother, she has returned to her village where she now looks after her parents and two children.

For the next few years, Moriom will receive enough monthly compensation from the Bangladesh government to support her family. To collect it, she must travel to Dhaka every month. But the money will eventually run out. She doubts she can ever work in a garment factory again and has set her hopes on launching a small food store.

“When people have their own hands, it is a big thing,” said Moriom. “The owners can get back money that they lost, but the workers won’t get back what they have lost.”

The government and the employers should understand the value of other people’s life, she said. If they value life, they will ensure that no more garment workers are injured or killed.

If Moriom had a chance, she would like to tell factory owners that they “should pay the workers according to the load of work you put on them.”

Despite her difficulty sleeping, her ongoing pain and her new caretaking burdens, Moriom remains positive because she expects her children will have a better life than she experienced.

“I may face lots of pain. But I hope my children will be educated and not face any problems in the future.”