A far-reaching project by Poland’s largest union federation is providing comprehensive assistance to Ukrainian refugees to ensure they have fundamental rights on the job as they take on new employment in the country.

“When the war in Ukraine broke out and refugees started coming to Poland in huge numbers, we knew that we had to integrate them,” says Piotr Ostrowski, vice president of the All-Poland Alliance of Trade Unions (OPZZ), which is spearheading the project.

“Trade unions must ensure decent working conditions for all: For youths and adults. For men and women. For locals and migrants. No matter what passport they have, what color their skin is, where they come from. Migrants must not be exploited.”

More than 100,000 Ukrainian refugees, 75 percent of them women, have found jobs in Poland, an extraordinary number facilitated by a law Poland passed in March allowing Ukrainians entering the country after February 24 to secure employment without special permits.

Yet, like migrant workers around the world, they are vulnerable to exploitation, with some employers refusing to pay full wages or otherwise violating fundamental worker rights.

In March, OPZZ launched Unions Helping Refugees, staffed by lawyers and other experts who educate Ukrainian workers on their rights under Polish law and assist with cases involving unpaid wages or wages lower than the minimum, and offer legal review of employment contracts to ensure they are within the law. The Solidarity Center made a significant contribution toward the OPZZ services.

“In OPZZ, we knew that we had to act as soon as possible to provide refugees with information about their rights on the Polish labor market and where they could go if they had problems,” Ostrowski says.

The free service is available in person, by email or through a new info line. Most recently, OPZZ began offering free psychological consultations for war refugees.

All Refugees Must Be Treated Equally 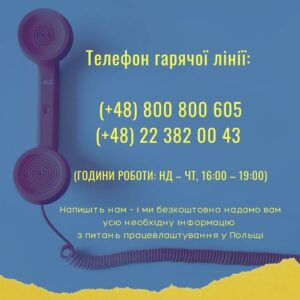 “Our team of experts supports refugees in the workplace and helps migrant workers get fair working conditions,” reads a typical post on the Unions Helping Refugees Facebook page. “What do we do and how can we help?”

Through its Facebook page, billboards and posters in bus stations and other transit areas, Unions Helping Refugees is reaching out as widely as possible to connect with Ukrainian migrant workers. Union staff assisting the refugees say in addition to seeking jobs, Ukrainians are looking for information on social benefits and finding housing.

One of the biggest challenges—in addition to trying to assist so many Ukrainian refugees who come to Poland—is finding people who speak Ukrainian: “Many refugees do not speak Polish. Although Polish and Ukrainian are similar, they are two different languages,” Ostrowski says. “The alphabet is also different. In Poland, we use the Latin alphabet. So the main problem is reaching the refugees and the language barrier.”

OPZZ is undertaking this massive effort even as the union addresses issues affecting workers throughout Poland, like falling wages, an increase in precarious working conditions—especially for young people and migrants—and the proliferation of what Ostrowski says are “junk” contracts that do not protect worker rights.

Yet, the bottom line, says Ostrowski, is that all migrant workers and refugees have the same rights as everyone—and must be treated as such.

“While helping the Ukrainian refugees, we should not forget about other refugees,” he says.