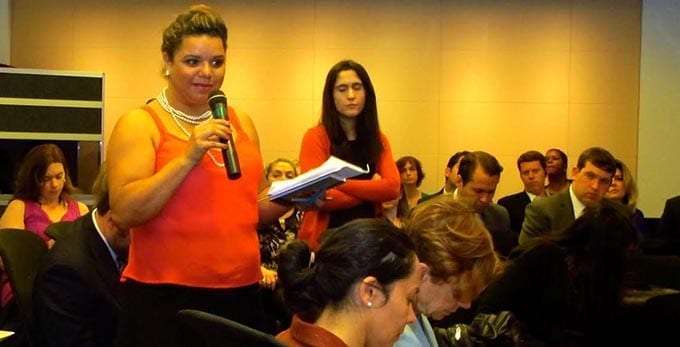 Mércia Silva, director of Brazil’s InPacto, an organization focused on eradicating forced labor in businesses and their supply chains, often must meet with owners and managers of companies where forced labor exists. But she doesn’t approach them “with theory,” she says.

“I take a photograph of a worker working under extremely difficult conditions and I ask them, ‘Would you like someone in your family to work like this?’ ‘Of course not,’ they say, and from there we are able to make change.”

Silva shared her strategies for empowering workers last week on the panel, “Raising the Floor—Fresh Thinking to Improve Working Conditions and Workers’ Rights,” a discussion on worker-driven strategies to improve conditions for workers enduring the most abusive conditions. The panel was part of a two-day, two-city International Labor Organization (ILO) conference, Out of the Shadows: Innovative Approaches to Combating Forced Labor and Other Forms of Worker Exploitation.

“The presence of forced labor in society doesn’t happen in a vacuum,” said Solidarity Center Executive Director Shawna Bader-Blau. “Forced labor is created by policy. And change comes from the demands and voices of workers and their unions standing up for their rights, standing up for better treatment.” Bader-Blau facilitated the panel, whose primarily U.S.-based participants discussed a range of strategies—including enlisting consumers and the global labor movement—to assist workers in winning their rights on the job.

“You can’t organize anyone with a vague vision,” said Saket Soni, executive director of the National Guestworker Alliance. “These are people who have been staring into the face of evil (forced labor). The alternative has to be concrete. For us, that alternative is, ‘what if you could sit down and negotiate a contract with your employer?’ The only way you can do that is to collectively organize.”

“It’s important to open the door to unions” for these workers, she said. The Solidarity Center works with CUT and other Brazil union federations to help empower vulnerable workers. The AFL-CIO and the CUT have a several decade-long partnership to promote fundamental labor rights in the United States, Brazil and across the Americas.

Women make up a large percentage of workers in forced labor, and panel participants pointed to their key role in taking the lead to improve their working conditions. Neidi Dominguez, director of the AFL-CIO Worker Centers and Community Engagement, discussed how even though Los Angeles carwash workers are predominantly male, women workers were among those who stood up and demanded to be paid a regular wage. Until they did, carwash workers were paid on through pooled customer tips.

The conference, held in in Washington, D.C., on April 22 and in Los Angeles on April 24, brought together representatives from civil society, government and business to discuss strategies to prevent and mitigate exploitative labor practices, with a focus on the United States and Brazil. These strategies aim to decrease workers’ vulnerability to forced labor and other forms of worker exploitation.