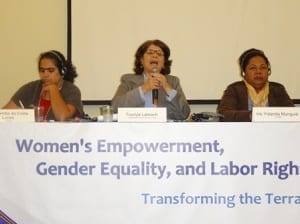 Women Worker Rights in Agriculture: The Reality, Challenges and Opportunities

Samantha Tate set the stage for the discussion on women in the agro-industry, one of the conference’s three themes, by pointing out how women’s increasing presence in agriculture offers both challenges and opportunities. Working in large scale agriculture creates a whole new set of risks for women, Tate said, including increased sexual harassment and a work model that turns women into machines. But the agriculture industry also offers women the opportunity to have a job, which can enable them to provide their children with an education with the goal of improving their lives and livelihoods.

Rosa Julia Perez Aguilar began her overview of the working conditions for women agricultural workers in Peru by saying that although the agriculture sector “grows and grows, we as workers are not growing.” Salaries are so low in this industry, children are forced to work and so are denied an education. Perez Aguilar said the average monthly salary for a female agricultural worker in Peru is $234 per month—while the basic cost of living for a family of five is $546 per month. Women are not paid overtime, and end up working 10 to 12 hours a day.

Unions are seeking employer provision of child care because women agriculture workers who are also the family breadwinners go to work at 4 a.m., and leave their children with neighbors, often exposing them to a lot of violence. These workers also have little access to good quality health care.

At the workplace, women experience many labor rights violations, including job loss because of pregnancy and no paid maternity leave if they do not achieve work targets. Women are often sexually harassed by supervisors but do not report it because they do not want to lose their jobs. They are subject to age discrimination—“after a certain age, women’s contracts are not renewed”—and employers favor men with work, sending women home.

Describing working conditions in the agro-industry, Perez Aguilar said health and safety protections are not sufficient, –for instance, when using sharp tools—and “if we suffer an accident, it’s very rare we get any assistance.” Drinking water is not readily available, and “especially in summer, we suffer a lot.” Women must walk long distances to find drinking water.

Perez Aguilar concluded by noting that in 2012, her union was among nine that joined together as a confederation, FENYAGRO, with the aim of coordinating efforts among unions to pass laws to improve working conditions for agricultural workers, at the regional and national levels.

Iris Munguía overviewed her work among women working in the banana and pineapple sectors of Honduras, where she is based, and in several other Latin American countries where she now has broadened her outreach. Munguia worked 22 years at a fruit packing plant and now heads the Honduran banana and agricultural worker confederation, COSIBAH (Coordinadora Sindicatos Bananeros y Agroindustrales de Honduras), founded in 1993. Munguía also is the first female coordinator of COLSIBA, the Latin American coordinating body of agricultural unions.

Achieving better wages and working conditions for Honduran agricultural workers required reaching out across the border: In 2004, union leaders in Central and South America came together to craft a regional agenda, and they meet every two years to refine it. The coordinating body, COLSIBA, has a standard contract template with 20 clauses that address women’s specific concerns. When a union in one of the participating nations goes to the bargaining table, women can use the contract template as a tool, adapting it to meet their specific situations. Central American agricultural unions also partnered with the global union federation, the International Union of Food Workers (IUF) for greater international exposure of working conditions on plantations and in packing and processing plants.

Munguía has focused extensively on leadership training among women, and more women now are on negotiating committees. As a result, women now negotiate contracts in the Spanish feminine form as well as in the masculine, because employers have taken advantage of contracts written in the masculine form to leave women out of receiving benefits. Women also have negotiated access to sanitary napkins, which men had refused to negotiate because they found the topic embarrassing.

They also are making inroads in addressing sexual harassment on the job. COLSIBA and the IUF negotiated a Regional Framework Agreement with Chiquita, finalized in August, that includes a zero tolerance policy for workplace sexual harassment.

Munguía emphasized the importance of committing to paper the gains women make so they will be there for future generations. “These advances allow women to put things in writing,” she said. “We have to enhance the vision of women and the work that we do.”

Munguía was the subject of a 2005 study by scholar Dana Frank, Bananeras: Women Transforming the Banana Unions of Latin America, which explores how women banana workers gained control over their unions, workplaces and lives. She referenced Bananeras and also showed a book compiled by women agricultural workers which includes the personal testimonies of rape survivors.

“Words spoken are often taken by the wind, but if we write them down, they will be there for future generations.” She continued: “The important thing of all this, brothers and sisters … is how the good things we are able to achieve, we have to trade them among ourselves to strengthen ourselves.”

Touriya Lahrech began by expressing her solidarity with conference participants. “The moment we go back to our countries, I will tell my colleagues and sisters we are not alone. Our solidarity as women coming from across the globe can only move forward our positions as women.”

Lahrech then described the life of women agricultural workers in North Africa as “poverty on top of poverty.” The majority of women in agriculture come from extremely poor families who did not have a chance to get education and so there is widespread illiteracy and a lack of skills. Despite a “raft of labor laws” and even though nations such as Morocco and Tunisia have ratified ILO conventions protecting workers, agricultural workers lack basic conditions, and women always remain in the same low-paying, back-breaking jobs they start in, she said.

Women in this region also must suffer in silence: “They should be silent and shy and not even look into the eyes of men.” Yet in reality, women are strong. Lahrech described an agriculture strike in which workers and union leaders were arrested, so women went to the front lines with their children to block the police from arresting the men. As a result, they achieved some improvements in social insurance coverage.

Like Munguía, Lahrech emphasized illiteracy as a significant barrier to women’s self-advancement. Unions found that women were not attending union-sponsored trainings because of literacy problems. “So instead of using conventional means of lecturing, we used pictures and participation was higher,” Lahrech said. Even through pictures, union trainers could explain such difficult topics as the role of world financial institutions in local economies like Morocco, as well as discuss ILO conventions.

The workshops, held with the Solidarity Center, trained women who went on to train other women in remote villages, educating them that worker rights are civic rights. Some of these women are now negotiating first contracts with employers who had fought unionization.

Alessandra da Costa Lunes began by noting that her confederation, CONTAG, represents 22 million workers in 3,900 unions and 27 union federations. She coordinates family agricultural workers and working peasants for CONTAG, which is seeking to replicate its National Women’s Commission at all regional levels. Other items on CONTAG’s agenda include working with young people to change patriarchal structures that inhibit women and young workers; fighting the invisibility of women; and ensuring technical training and other public policies reach women who may work in such remote areas that they are not aware of their rights on such issues as sexual harassment.  Some 48 percent of rural workers are women, she said, and 25 percent of rural population is made up of young women between ages 18 and 34.

“Slave labor is constantly growing in Brazil,” she said, and “families are expelled from land by global corporations.” She noted that Maria Dias Costa, the wife of a union president who was murdered, is just one example of women left without husbands who are targeted for their union activity. Local unions often are all female because the men have been murdered or don’t want to be in a union for fear of experiencing violence.

Last March, 100,000 women joined in the March of the Margaridas, named in honor of a sister lost in the field. The march was part of women’s efforts to break the invisibility surrounding violence. The women demanded policy changes to ensure equal treatment of men’s and women’s issues. Women also are bringing their demands to the bargaining table, and this also gives them visibility.

She noted that Brazil has much good legislation, including laws prohibiting violence against women. “We’ve managed to advance a lot,” she said. Still, the challenge remains to break the silence that give impunity to those who commit violent acts and to protect women from violence. “Overcoming inequality will mean full citizenship for women,” she said, concluding with the rally call:

“We are fierce, fighting women.”