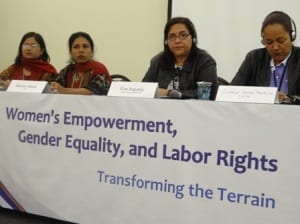 Panelists discussed their efforts in helping women in light manufacturing get a voice on the job. Credit: Tula Connell

In the first plenary of the second day of the Women’s Empowerment conference, Tim Ryan opened by setting the stage for discussion with images from the April Rana Plaza building collapse in Bangladesh. More than 1,200 garment workers were killed in the disaster. “One of the things we’re going to be doing today is hear about women in the light manufacturing sector and the tools they use to empower themselves,” he said: “Apologists for garment manufacturers say for some women to be able to earn $38 a month is empowering.” But to be really empowered, Ryan said, “women need good jobs and have to be able to empower themselves.”

See the photos from the Rana Plaza building collapse.

Morium Sheuli began by saying she started work in a garment factory when she was 9 years old and organized her first union at age 14. She recently was elected general secretary of BIGUF, the country’s largest independent garment worker federation, which represents 1.1 million workers. Women make up 80 percent of the 4 million garment workers in Bangladesh and 70 percent of all women employed in the nation’s manufacturing sector. Formed in 1996, BIGUF believes in women’s leadership in the garment sector and initiated the idea that women should hold the primary leadership positions. In the last five years, BIGUF assisted workers in filing 1,265 formal cases around missing wages and other workplace issues.

Evangelina Argûeta Chinchilla also started working in the apparel sector at a young age: 15. She noted the textile industry is one of the largest in Honduras, with 115,000 workers, 57 percent of whom are women.

Thirteen unions represent textile workers in Honduras, and there are three central bodies. One of them, the General Workers Federation (CGT), includes three unions with women presidents and cooperatives headed by women. “We think we have overcome enormous barriers,” Argûeta said.

Since the 2009 presidential coup, worker rights are more vulnerable and there has been an erosion of rights. Laws now allow temporary work and work by the hour—all of which undercuts workers’ ability to support their families. Despite Honduran laws allowing unions, in reality unions often “are forbidden from doing our work.”

Because of the struggle to organize factories in the last 10 years, Honduran unions reached across the border for allies. Argûeta cited the success of this strategy in the case of Russell/Fruit of the Loom, Inc., the largest private employer in Honduras. When it closed a factory, an international campaign by students forced Russell/Fruit of the Loom to rehire 1,300 workers. As part of the agreement, all seven Russell/Fruit of the Loom supplies were required to respect labor rights. As a result, other companies signed agreements—but some would rather leave the country, she said. Argûeta pointed out that brands have a moral obligation to be responsible for what’s happening in suppliers’ factories. Brands look at productivity but not social costs. It’s the same in Bangladesh, Nicaragua, China…

International support also extends to training, and the unions are allied with a Honduran women’s NGO that trains women labor leaders to be legal assistants.

Throughout the struggles to organize workers, Argûeta and her cohorts have fought gender discrimination. “In any union structure, there is sexism, of course” she said. “But we can still carry on our work.” Women are at the bargaining table and labor/management councils include equal numbers of men and women workers.

As Argûeta concluded: “In Honduras, we started off demanding our rights and demanding brands are responsible for working conditions through their suppliers.”

Tim Ryan noted that two important issues emerged from the presentations: the role of brands and the macro political impact on wages and working conditions.

Claudia Santos Reguelin overviewed the women’s collective of metalworkers union, formed in 2007, which she described as having strengthened the 50-year-old Brazilian Metalworkers Union of the City of Osasco. Many factories in Brazil are made up of more than 80 percent women workers, she said, and the collective’s goal is to strengthen representation of women in unions and serve as a tool for organizing women workers. Members of the collective, who work at different factories, meet monthly, and the collective provides a space for women to network and have time for themselves.

Reguelin showed photos of women metalworkers taking part in the collective’s training programs, which cover such issues as health and safety; communications; organizing; a solidarity economy, in which low-income and middle class workers benefit as well as the wealthy; women in media; cultural activities; and election participation. The collective also sponsors a trip to the May Day exhibition, holds special activities for Women’s Month each March and plans leisure activities.

One of collective’s campaigns centers on “shared responsibility”—work time and free time for both women and men.

She closed with an image of a sign saying, “Strong woman for me, for us, for everyone.”

Linda Yanz opened with an overview of the Maquila Solidarity Network, which she described as formed 20 years ago to work on corporate campaigns to pressure brands such as GAP and NIKE to take responsibility for the workers who made their products. Twenty years ago, brands wouldn’t take responsibility, she said. The organization works with the Worker Rights Consortium, the International Labor Rights Foundation and the Clean Clothes Campaign to answer the question, “How can we get the brands to take seriously the systemic problems in the garment industry?”

Before the Rana Plaza disaster, the coalition was answering that question by pursuing framework agreements such as the one in Honduras with Russell/Fruit of the Loom. In the wake of the Rana Plaza disaster, nearly 90 corporations have signed onto the Bangladesh Fire and Safety Accord, a five-year binding agreement which covers 1,800 factories in Bangladesh. The accord mandates that both brands and the companies they source from fix building and fire hazards and ensures unions are a key part of this process. Before the accident, Yanz said, “we had two brands signing on.”

“These kinds of agreements are a new game plan for corporate responsibility work,” she said. Shifting from “voluntary cooperation” by brands to binding agreements is essential. “Since the crisis, we have moved toward getting agreements signed, so that brands sign commitments around particular issues and particular cases.”

The next step, Yanz said, is to “figure out how to deal proactively to get brands to deal with freedom of association, precarious work, closures, crises and poverty wages.” She noted that real wages have declined recently and “the only place that garment wages have increased is in China, but it will take 40 years to get China’s wages up to a living wage at the rate the wages are growing.”

Yanz then turned to women’s empowerment. She said that although “many of us work with women, women leaders, women’s organizations, somehow we’re not moving forward the dial on women’s leadership.” It’s easy to talk about women making up 80 percent of workforce in sectors but it’s “a whole other thing to put women front and center in these unions.”

Priorities like precarious work are key, “but we spend very little time discussing the enabling issues—what is behind women not taking leadership roles?” she asked, adding that lack of child care is one factor. Another question that needs to be discussed: “What would it mean if we put women’s needs on the agenda” to enable women to be leaders?

In the global labor movement, Yanz concluded, “we’ve got to make sure that global leadership is not out of step with the work on the ground”—leaders should be part of the process.