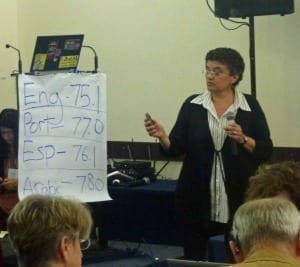 Nina Benjamin provided highlights from a Solidarity Center-commissioned report compiled by the organization, Gender at Work, and the Labour Research Service in South Africa.

The report, “Bringing Back the Heart: Gender Action Learning Process with Four Trade Unions in South Africa,” detailed the Gender at Work process with unions that are grappling with the complexities of gender inequality. The project utilized an analytical framework for achieving gender equality in organizations, with “a lot of our work…at the consciousness-raising level,” said Benjamin.

Before describing the four case studies, Benjamin made three points about South Africa:

She briefly described the four unions that took part in the program.

• The South African Commercial Catering and Allied Workers Union (SACCAWU) represents retail workers who, because they are low paid and on contract or short-term work assignments, face ongoing threats of retrenchments.
• Sikhula Sonke is a farm workers union that was founded by, and represents primarily women agricultural workers.
• Building, Construction and Allied Workers Union (BCAWU), representing an almost entirely male building and construction workforce, was interested in finding innovative ways of recruiting women into the union.
• Health and Other Service Personnel Trade Union of South Africa (HOSPERSA), is battling the public’s perception that nurses are the problem in the health care system and the process of rebuilding with the union involved extending its focus beyond the normal union concerns of wages.

Gender at Work facilitators begin the process, which averages 18 months for each organization, by working with individuals to engage in sustained collective effort, Benjamin said. By engaging with the “whole being,” the process situated learning that goes beyond rational or intellectual capacities and works with the body, heart and mind. Each team involved in the “change process” saw the need to experiment with alternative models of power and alternative structures to the silence and status quo, she said.

Benjamin detailed the structure of the Gender at Work Action Learning Process (GALP) and overviewed some of the outcomes for each union. These include:

• SACCAWU – The union is working with shopping mall committees that bring together workers, especially women, from different companies in spaces where they can speak more freely about their day-to-day lived experiences.

• Sikhule Sonke – The union is in the process of strengthening the committee that helped to create new layers of women leaders who are directly in touch with the day-to-day challenges of farm workers.

• BCAWU – Through its education committee, the union began bringing women workers together in “safe spaces” where the focus shifted from “educating them” to facilitating the sharing of experiences and strategies.

• HOSPERSA – The union is building on the “Lekgotla” dialogue process to open similar dialogue spaces, for example, during constitutional meetings and provincial congresses.

She concluded by saying that “ensuring systemic change requires ongoing and sustained reflection and action. It remains a methodological and cultural challenge for unions to sustain the creation of learning and reflection spaces as part of on-going union organizational culture when the GALP ends.”