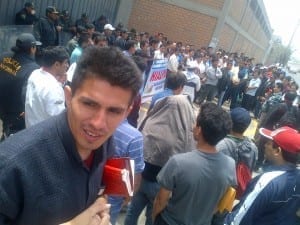 Peruvian textile workers are standing firm in their demands that a textile company obey a recent Labor Ministry ruling requiring the company to transition workers to permanent job contracts.

Since November 1, members of the Hialpesa Workers’ Union have been reporting to work without signing fixed (short-term) contracts. The Hialpesa textile factory is refusing to allow workers who have not signed a new contract back to their jobs.

In September, Peru’s Ministry of Labor ruled that all 1,008 workers at the Hialpesa textile factory in Lima be transitioned to indefinite term (permanent) contracts that would guarantee job security. Despite the Ministry’s ruling, Hialpesa has conditioned employment by offering workers only fixed-term contracts.

Peru’s complicated export laws have led to the abuse of short-term contracting, which not only severely restricts worker rights but also discourages workers from reporting workplace violations and exercising their rights because they fear their contracts will not be renewed. Although numerous short-term contracts have been renewed over the years, the lack of employment guarantees means workers are unable to plan for the future and adds to their economic vulnerability.

“The union is standing firm and we’re not going to sign any more short-term contracts or deals that fall short of full recognition of our rights,” said Pedro Broncales, general secretary of the Hialpesa Workers’ Union. “The Labor Ministry has issued its resolution. Now it’s time for Hialpesa to respect it.”

The Hialpesa workers’ demands are both legal and with precedent—in September 2013, another Solidarity Center partner, the Union of Workers at Franky and Ricky apparel factory in Arequipa, campaigned successfully for its employer to move 300 workers who were on short-term contracts onto permanent contracts. The Solidarity Center has partnered with members of the Franky and Ricky union on trade union capacity building and labor rights enforcement campaigns since 2011. As a result, the largely female apparel workers now have more employment stability.

Jyrki Raina, general secretary of the global union federation IndustriALL, is urging the ministry to enforce its decision.

Earlier this year, six international apparel companies threw their support behind repeal of a law in Peru that allows employers in the garment and textile export industries to hire workers on consecutive short-term employment contracts.