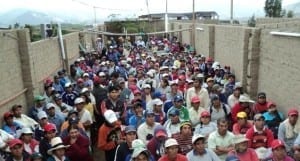 Eighteen agricultural workers in Peru were detained during a work stoppage as they protested an agro-industrial company’s failure to uphold its collective bargaining agreement, according to the Camposol Workers’ Union (SITECASA). One union leader, Carmen Silvestre Rodríguez, was beaten by the national police, and the union’s general secretary, Felipé Arteaga, has been arrested, the union said.

SITECASA members began a peaceful work stoppage March 12 at the company’s facilities in Chao, a town in the country’s northern region. They are seeking the company’s compliance with several provisions in the region–wide collective bargaining agreement reached in July 2013, including resolution of daily production quotas for field workers, payment of annual profit sharing and provision of proper uniforms, footwear and meals for workers.

Field workers, who harvest avocados, mandarin oranges, mangoes and blueberries for export, currently must harvest 60 pallets before they receive their minimum daily wage of $11. According to the union, Camposol has conditioned its willingness to negotiate these points on the union’s retraction of an article in the collective bargaining agreement that provides employment stability (an indefinite contract) for workers with four years working for the company.

Camposol S.A. is Peru’s largest producer and exporter of non-traditional horticultural products like asparagus. Approximately 14,000 workers labor on Camposol’s vast plantations throughout the country. In 2012, the U.S. Department of State’s Human Rights Report cited Camposol for interfering with workers’ right to strike after the company failed to reinstate 250 workers dismissed for participating in a strike during collective bargaining.