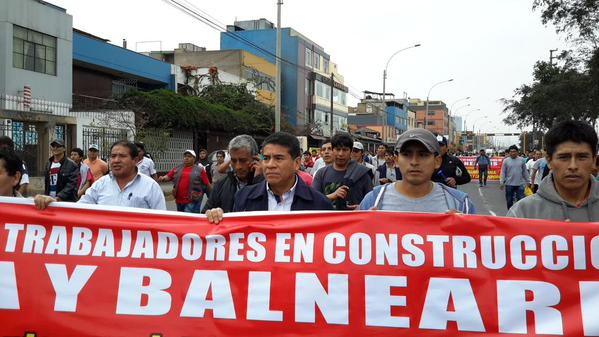 One construction union leader was killed and another injured as the men left a union organizing meeting in Casma, Peru, this week.

Union leaders say the violence stems from groups that have set up fake construction unions and are waging attacks on FTCCP leaders and members if they do not participate in their extortion schemes. According to FTCCP Social Security Secretary Félix Rosales, Cotelo and FTCCP General Secretary Silvestre José Mota, who was injured in the attack with Cotelo, received death threats by phone and text after they refused to take part in extortion activities. 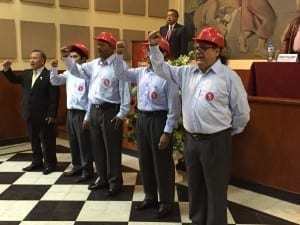 STCCLB leaders are sworn in to office after a union election. Credit: Solidarity Center/Samantha Tate

The FTCCP is a member of the Confederación General de Trabajadores del Perú (General Confederation of Workers in Peru, CGTP), and both are calling for a meeting with government officials and employers to address the issue of fake unions, and are asking the Ministry of Labor to remove the fake unions from its records.

Buenaventura Vera Perez, secretary-general of the Lima and Environs union (STCCLB), says the violence is in part a campaign to eliminate collective bargaining rights, because the FTCCP and its affiliates are the only unions that negotiate collectively.

“There is no political will to end the violence,” Buenaventura says. “Authorities say that they don’t know where the guilty parties are, which is ridiculous. We have given the police names.  Until when do we have to live with this constant threat?”

Perez made his remarks yesterday at a swearing-in ceremony for STCCLB leaders, who were  elected after 4,370 construction workers cast their votes in democratic elections

Also speaking at the ceremony, CGTP Vice President Juan José Gorritti says that while the government sends police to target and even assault anti-mining protestors, the government does not dispatch the officers to address the violence in the construction industry and ensure safety for the workers.