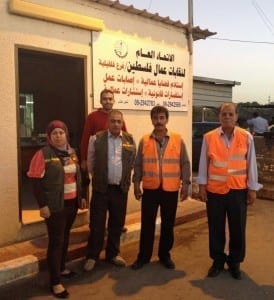 Tamam Abdel Hafiz and co-workers at the Qalqilia border, where they talk with Palestinian workers. Credit: Francesca Ricciardone/Solidarity Center

By 4 a.m., Tamam Abdel Hafiz’s colleagues are already at the Qalqilia border crossing, talking with some of the more than 4,000 workers who head for jobs each day from Palestine to Israel and West Bank settlements. Hafiz and three other members of the organizing team of the Qalqilia branch of the Palestinian General Federation of Trade Unions (PGFTU) converse with workers all day and long after the border crossing closes at 7 p.m.

Some 10 percent of those who cross the border for work are women who toil in agriculture or as domestic workers. On average, they are paid around $40 per day, although the minimum daily wage under Israeli labor law is $56 per day. Because few decent work opportunities exist in the depressed Palestinian economy, many Palestinian women and men travel hours to access jobs in Israel, despite long queues at checkpoints, frequent harassment from soldiers and risk of injury or harassment inherent to informal employment environments.

Hafiz recalls a recent case of a woman fired from her agriculture job when the company changed ownership and the new owner refused to pay wages owed. Through PGFTU-Qalqilia efforts, the woman successfully claimed her wages from the employer and was placed in a new position.

Through round-the-clock support and an onsite office supported by the Solidarity Center, PGFTU organizers also provide workers with a variety of services, including job counseling; legal referrals for unpaid wages, medical treatment and employer reimbursement for workplace injuries; and education around labor rights.