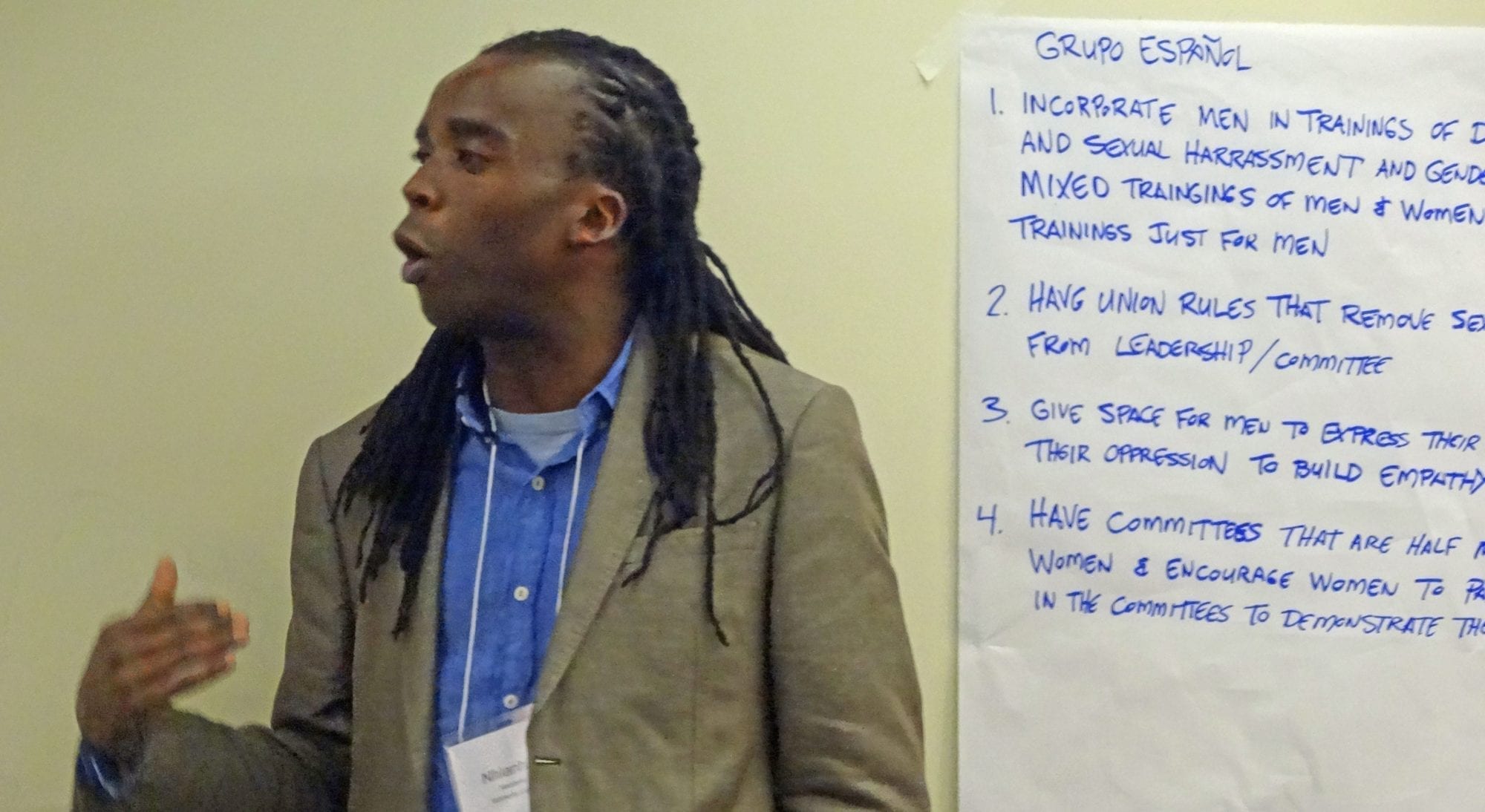 Nhlanhla Mabizela says he first truly grasped the meaning of gender inequality on a winter day in the dusty streets of Alexandra Township in post-apartheid South Africa.

Cutting through an alley surrounded by houses made of iron scrap and plastic sheets, Mabizela and a friend came across a group of children playing. All were barefoot in the cold, with a single layer of clothes he assumed were the only ones they owned.

“Guess the first thing that popped in our minds?” asks Mabizela, Solidarity Center program officer for gender. “Where are the mothers of these children?” Seconds later, he and his friend encountered groups of men sitting around a fire, drinking and laughing. Nearby, they also saw a woman doing laundry in a large corrugated bathtub, her hands immersed in icy water.

“There and then we had the answer to our question and a new one was born and it was, ‘What is happening in the mens’ minds?’ That was the day when it dawned on me that gender inequality is alive and some of us are quite comfortable with it.”

Solidarity Center Helps Unions Put Gender Equality into Practice
Solidarity Center programs around the world address gender inequality at the workplace and within unions and society. In South Africa, Mabizela holds trainings to empower women to join unions and take leadership roles and advocate for themselves and their families. Crucially, his workshops also focus on helping men understand cultural expectations and how those assumptions shape male leadership roles that are based on excluding women.

Mabizela’s work highlights a frequent dichotomy. Unions are key drivers in advancing gender equality. Yet in many countries around the world, there is a disconnect between labor union policy and practice in transforming gender inequalities within their own structures. Through the lens of the South African union movement, a new report commissioned by the Solidarity Center explores the disconnect and examines new strategies for closing the gap between policy and practice.

“Putting Union Gender Equality into Practice: The Role of Transformational Leadership” describes how “feminist leadership” can be encouraged within the South African trade union context in part by creating a democratic organizational culture and an environment that supports women workers in their struggle for emancipation and assists men to free themselves from patriarchal forms of power.

“We have internalized and institutionalized gender roles and the division of labor,” says Mabizela. “We have failed as a country to interrogate patriarchy and hence we will move four steps forward and six steps backwards. We are so immersed in the debates about political power at the expense of all the other oppressions in sexism.”

‘Everything Is Structured around Men’
South African unions and federations long have sought to redefine and reshape patriarchal structures, cultures and practices to better inhere gender equality. Beginning in 2005, several South African unions sought to develop alternative models of power after recognizing that male-dominated, hierarchical, union culture does not easily address such issues as violence against women and sexual harassment of women within the union. They took part in Gender at Work’s South African Gender Action Learning Program to employ gender-inclusive and accountable power building and power sharing.

Authors of the new study interviewed the men who took part, and reported that they  expressed an appreciation of how, by challenging male stereotyped behaviors and aspects of patriarchal power relations, they have enriched their private and public relationships and strengthened their commitment to gender equality.

“The much broader question is the need to look at how male culture influences everything—how everything is structured around men,” says John Apollis, a leader from the General Industrial Workers Union (GIWUSA) who is quoted in the report. “We need a fundamental reorganization of the union otherwise we are not going to get far with breaking male dominance.”

Some of the men also noted they struggle with alienation by their peers, who see their efforts to incorporate gender equality in the union and at home as setting them apart from traditional male roles.

‘I Would Not Like to Rehash What Our Fathers Did’
Mabizela says he was aware of gender inequality even in childhood, when the girls would “disappear” after school to wash dishes or clean house, while the boys played outside.

But the winter day in Alexandria Township spurred him to “reflect on how easy it was for us (me and my friend) both men, to put the burden of care squarely on women’s shoulders and be oblivious to the effects of gender-based violence. That day still exists in many parts of this world and not only in shanty towns of South Africa, but also in the leafy suburbs of the affluent.”

He works with four South African union federations on the International Trade Union Confederation’s Labor Rights for Women Campaign and assists federations in developing sexual harassment policies and gender policies. He brings to his work experience as a peer educator for me at Planned Parenthood of South Africa and as a program officer for EngenderHealth’s Men as Partners Program.

In striving to embody the change essential for advancing gender equality in South Africa, Mabizela is blazing a trail for others. When describing the influences that motivate his work, Mabizela says he often thinks about how much he yearned to have a father in his life when he was a child—an experience he later learned was not uncommon.

Now, as the father of an 11-year-old son, Mabizela says, “the thought that I would not like to rehash what our fathers did, motivates me to do the work that I do. Observing my son grow, and developing confidence and not being afraid to show his emotions—it is enough motivation to carry on for his sake and the betterment of our societies.”