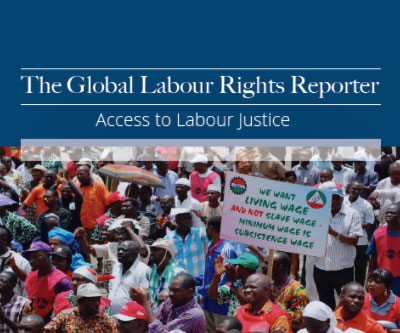 Labor lawyers and other worker rights advocates from around the world took part in the launch of a new law journal dedicated to advancing justice for workers.

The Global Labour Rights Reporter, a project of the Solidarity Center’s International Lawyers Assisting Workers (ILAW) Network, intends to be a global forum for labor and employment law practitioners, who also will grapple with the legal and practical issues that directly affect workers and their organizations. 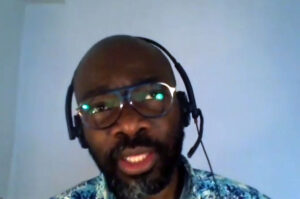 Authors who contributed to the first issue, with its theme, “access to justice,” yesterday shared their contributions to the journal, which includes 10 articles and is available online in English, French and Spanish.

“The labor movement is about expanding justice for all workers,” Solidarity Center Executive Director Shawna Bader-Blau said in opening remarks. “The network is the first effort to bridge and build a pro-labor network of lawyers that has labor justice at its heart.”

The Solidarity Center launched the ILAW Network in December 2018 as a global hub for worker rights lawyers to exchange ideas and develop strategies to best represent the rights and interests of workers and their organizations. Since then, more than 600 hundred individuals and organizations from more than 70 countries have joined. 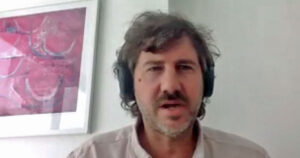 Several participants discussed workers’ lack of access to courts and the legal process as a major block for workers attaining justice.

For instance, it took 22 years to get a judgment in the case of a manufacturing plant in Brazil, where 60 workers were killed, 59 of them women, said Matías Cremonte, regional vice-president of the Latin American Association of Labor Lawyers.

“When it came time to enforce the decision, it couldn’t be done because the conditions don’t exist anymore,” he said. “Unjustified backlogs and delays by the government led to very profound damage.” Ensuring reparations are efficient and timely is key to achieving worker justice, he said.

Cremonte and María Paula Loranzo co-authored “The Right to Fair and Satisfactory Working Conditions: Risk Prevention and Access to Justice,” which explores workers’ access to compensation for occupational safety and health violations in Argentina, especially since the COVID-19 pandemic. 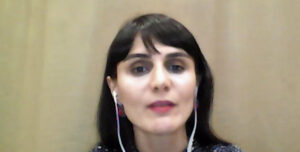 Raisa Liparterliani shared how unions in Georgia succeeded in restoring many worker rights that were eliminated. Credit: Solidarity Center

In addition to the institutional and practical challenges the judiciary faces, “it is not uncommon that employers will maintain a blacklist of the so called unwanted and dangerous—those who have applied to court to defend their rights,” Raisa Liparterliani, deputy chairperson of the Georgian Trade Union Confederation, wrote in the journal.

Discussing his article on Zimbabwean court practices, scholar Munyaradzi Gwisai said limited access to courts has denied workers a cornerstone of labor justice. “You can have rights in the constitution and labor rights, but they can be frustrated by the judiciary.”

By bringing together labor lawyers and worker rights activists, the Global Labour Rights Reporter seeks to share new strategies for ensuring worker justice, and Avery Kelly at the Corporate Accountability Lab described one such effort to enforce the legal rights of garment workers and others in the corporate supply chain.