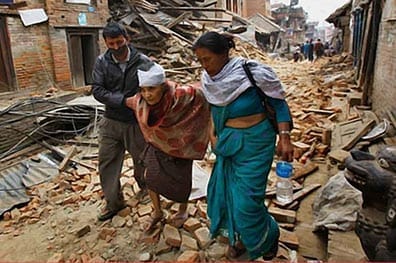 With thousands of people dead and even more made homeless in Nepal following a devastating magnitude-7.8 earthquake, Solidarity Center union allies in the country are reporting no casualties among their staff and are organizing to support relief efforts in the Nepali capital.

The General Federation of Nepalese Trade Unions (GEFONT), which represents mostly blue-collar workers, the Nepal Trade Union Congress (NTUC), which includes teachers and other white-collar workers and the Joint Trade Union Coordination Center (JTUCC), the umbrella organization of GEFONT and the NTUC, say their employees are safe and now working to provide disaster relief. Both GEFONT and the NTUC represent many workers in the tourist industry.

“Kathmandu valley is unimaginably destroyed,” says Bishnu Rimal, GEFONT president. “It is the most terrible quake we have ever experienced. Chilling cold, plus rain, lack of tents and [continuous] jolts is sufficient to scare people. It has disturbed even rescue work.”

The earthquake hit central Nepal on Saturday, from Mount Everest to Kathmandu and further west, wiping out entire villages. As rescue teams began to arrive from around the world, much of the stricken area remained inaccessible, locked in mountainous terrain with some roads blocked by landslides.

“We will … work with the global labor movement to ensure that the working families impacted by this tragedy receive the support needed to rebuild their communities,” Trumka said.

The earthquake and aftershocks were felt as far away as Dhaka, Bangladesh, where one garment worker was killed and more than 200 injured as workers rushed out of factories when the quake hit.