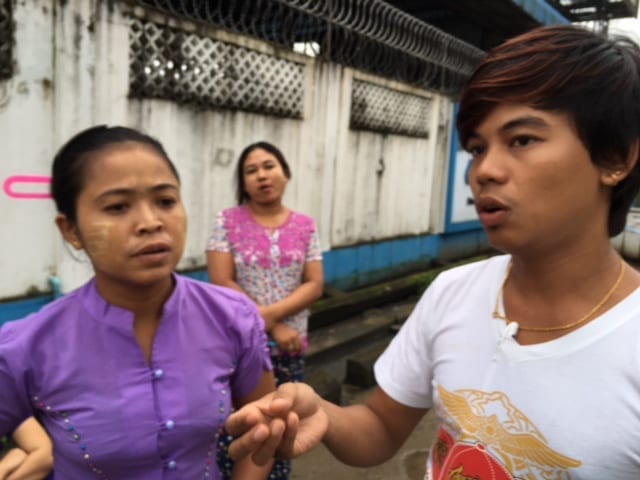 Fifteen minutes before the gray, 12-foot gate of the garment factory compound in Myanmar’s Hlaing Thar Yar industrial zone opens to release workers, vendors selling fried chicken on sticks and bags of nuts gather in anticipation. At a designated time, the guards roll back the gate and the vendors push their heavy carts up a steep hill and into the compound. If they hesitate, they are locked out as guards quickly close the gate behind them.

Minutes later, the gate is opened again, and workers rush down the hill to the dirt road, jostling for a place on the open transport trucks that will take them over rutted roads to packed apartments where they pay nearly a quarter of their wages to live. There, they can again access their mobile phones, which are prohibited from factory premises, where the heavy gate locks them behind steep walls from the start to the end of their daily shifts, six days a week. 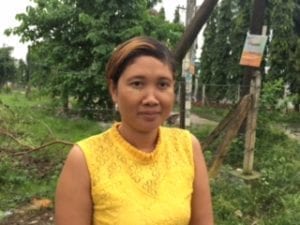 The scene is repeated countless times across the vast industrial zone, where more than 700,000 workers toil, including 300,000 garment workers. Corporate brands from around the world source their clothes, shoes and other apparel to factories in Hlaing Thar Yar.

Most of the workers, like Lwin Lwin Mar, 34, migrated to Hlaing Thar Yar, 12 miles northwest of Yangon, from other areas in Myanmar. Lwin Lwin Mar came from Irrawaddy Delta in search of a job after the 2008 cyclone devastated the region. Aung Myint Myat, a co-worker of Lwin Lwin Mar from the Bago region, sends money back home to his relatives, as do many factory workers.

Both garment workers helped form a union at a 200-worker factory, standing up to massive employer resistance. Many workers were fired in 2015 for forming the union, but with the assistance of the Confederation of Trade Unions–Myanmar (CTUM), some workers returned to the job.

“The life of workers is very poor,” says Myo Zaw Oo, a CTUM organizer who helps garment workers form unions and helps solve their problems at the workplace. “Workers don’t know about their rights. They are very vulnerable,” he says, speaking through a translator.

Last year, Myanmar passed its first-ever law setting a minimum wage—$83 per month—yet employers do not always pay it. Nor do they follow the country’s minimal safety and health regulations or overtime laws, union activists say, making worker education a top priority for CTUM. Even the full minimum wage is not sufficient for workers to support themselves and their families, union leaders say.

After five decades of military dictatorship, political transformation has opened the country in the past few years, and union leaders have sought to ensure that workers are part of the process structuring the ensuing economic and cultural change.

Shortly after he returned to Myanmar in 2012 after nearly 30 years in exile, CTUM President U Maung Maung met with corporate leaders of international brands at a Washington, D.C., conference sponsored by the Solidarity Center and AFL-CIO. The meeting was part of a labor-backed process to ensure corporate accountability and respect for worker rights are embedded at the start of the foreign investment process in Myanmar.

“Labor needs to be involved from the start,” Maung Maung said at the conference. “I would rather have workers’ rights built in from the beginning rather than added on later.”

Today, CTUM is spearheading union building at a rapid pace, with more than 60,000 workers forming unions since 2012, when Myanmar passed laws allowing the creation of unions. Factory-level union activists like Two Ko Ko, 32, are identified for leadership potential in CTUM, and invited to take part in training to build their skills. 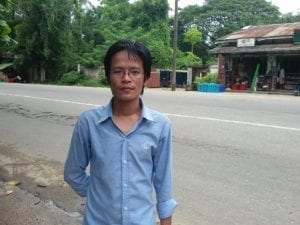 Now an organizer with the Building, Woodworkers Federation–Myanmar, a CTUM affiliate, Two Ko Ko helps workers form unions at cement and plywood factories in Hmawbi, an hour north of Yangon, as well as at construction sites.

“Workers don’t understand that they have rights that are on the books,” he says. “Law enforcement is weak. Unions help make employers follow the laws.”

For instance, says U Lim Mg, union president of a 170-worker clay factory where workers formed a union in 2012, “the union is enforcing the 1951 Factory Act that governs hours and safety.”

The workers ground and mold clay to make floor and roof tiles and are exposed to heavy dust. But until they formed a union, the employer provided only flimsy paper masks. Now, they have proper protective equipment, says Two Ko Ko.

“I have seen much progress since the union has been at the workplace,” says Tin Tin Than, 43, who has worked as cleaner for 10 years at the clay factory. She says their collective bargaining agreement ensures the employer pays the minimum wage and provides transport to and from the factory.

Despite the many challenges, including strong employer resistance to unions and a broad lack of familiarity with fundamental worker rights, Myanmar union activists like Two Ko Ko are determined to help workers achieve decent wages, safe and healthy workplaces and respect at work.

“The best part of my job,” he says, “is when people recognize their rights and decide to form unions.”