Farmers Form Unions across Myanmar to Save Their Land

Farmers across Myanmar are the fastest growing group of workers forming unions since 2011, when a new law allowed creation of unions. Credit: Solidarity Center/Tula Connell

On a hot, damp morning in Hlae Ku Township, Myanmar, Kyin San surveys the rice fields spread below her, as Mg Zaw, knee deep in mud, drives two oxen to plow the remaining plot. For many years, Kyin San, like most of the farmers in the area, worried that her land would be confiscated for large-scale development, as had so many other farms over the years. 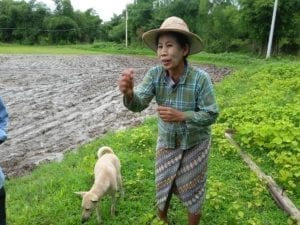 But now, Kyin Sun says, farmers are no longer hesitant to negotiate with the government to settle disputes. Along with 10,000 other farmers in the township, Kyin Sun has joined the Agriculture and Farmer Federation of Myanmar (AFFM), part of the Confederation of Trade Unions–Myanmar (CTUM).

“Through CTUM, we have made much progress,” she says, speaking through a translator.

Farmers across Myanmar are the fastest growing group of workers forming unions since 2011, when a new law allowed creation of unions. Within weeks of the law’s passage, farmers, woodworkers, garment workers, hatters, shoemakers and seafarers quickly registered their unions. 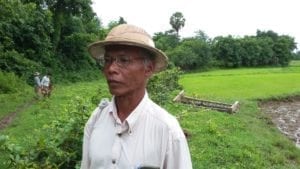 “Now we can communicate with farmers across the country and share our experience with others,” she says.

AFFM members are connected with the Asian Farmers Association for Rural Development, a regionwide organization based in the Philippines that provides training on seed production, food safety and other issues, says CTUM President U Maung Maung.

Speaking from CTUM offices in downtown Yangon, Maung Maung discussed how the federation is moving forward with the plan he nurtured for decades during his political exile in Thailand.

“We are doing what we wanted to do for the past 30 years—building unions, getting into negotiations with employers, trying to develop policies with labor and management,” he says.

Maung Maung was forced into exile after a violent military crackdown targeted thousands of pro-democracy demonstrators and labor leaders, many of whom were sent to prison. He returned to Burma in 2012 and since then, CTUM has helped some 60,000 workers organize unions. CTUM received official government registration last year.

Now, CTUM is working with policymakers to enact social welfare reforms and drafting recommendations for revising the country’s labor laws, many of which were enacted when the country achieved independence from Britain in 1948. After decades of military rule, Myanmar trails many Asian nations economically, and Maung Maung sees much work ahead in modernizing the workforce and developing a culture of social dialogue among workers, business and government common in other countries.

Fundamental to effecting the change CTUM envisions is educating workers about their rights. Workers for many years had no freedom to improve their working conditions, and unions now are helping them understand that they can stand up for their rights—and how to do so.

Because, as Maung Maung says, it all comes down to the workers.

“The workers have to know what they want—and they have to push for it.”