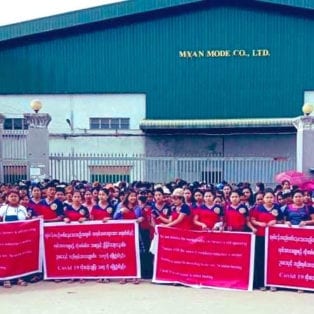 While workers around the world scramble for physical and economic safety amid the global pandemic, some factory owners in Southeast Asia see the crisis as an opportunity to attack workers’ unions to increase profits and deny worker voice.

On March 28, the Myan Mode garment factory in Yangon, Myanmar, permanently fired all 520 union members working in the factory and withheld March wages, citing a decrease in orders due to COVID-19. However, the owners kept all 700 workers who are not members of the union, and the factory continues to operate.

The Myan Mode union is one of the strongest in the country’s garment industry, with a history of strikes to improve wages and working conditions. For the Myan Mode garment worker and its president, Maung Moe, the blatantly discriminatory firings send a clear message: “They want to get rid of our union, get rid of our voices, get rid of the requirement to treat us like human beings, once and for all.” He added, “They see the coronavirus as an opportunity get away with it.”

The firings came just minutes after union leaders held a contentious meeting with management in which workers demanded an end to mandatory overtime due to fear of contracting COVID-19.  Shortly after, management announced the immediate termination of all union workers over the factory loudspeakers.

Workers Globally Fear Employers Will Use COVID-19 to Silence Them

With many garment factories around the world laying off workers or closing altogether due to the pandemic, many garment worker unions fear a spike in union-busting.

In recent years, employers have increasingly used temporary factory closures to break unions. In many unionized garment factories around Southeast Asia, owners briefly close the factory only to quickly reopen with new, non-union workers. Owners often change technical registration details such as the factory’s name or registrant to circumvent labor laws while maintaining the same core operation. The only change is the elimination of the unions.

With such a tactic already pervasive in the industry, garment workers fear that the global pandemic—with factories forced to temporarily close far and wide—will become a pretext for eliminating their unions. Myan Mode’s Korea-based owner did not wait for the factory’s full closure but simply cited the need for a partial workforce reduction as grounds to dismiss all of its unionized workers.

The Myan Mode workers, mostly young women from rural villages (Myanmar’s garment workforce is more than 90 percent women), refused to accept their dismissals. Hundreds of union members established a camp in late March in front of the factory gates, a common union tactic in Myanmar. Union members eat, sleep, sing union songs and otherwise live at the camp, sitting on the sun-baked dirt with nothing more than a nylon tarp to shield them from the hot sun.

Factory ownership has offered compensation to union members who accept termination and leave the protest camp. As a result, the union has seen its membership numbers diminish. A core group, however, refuses to leave for anything short of reinstatement. Nearly 100 fired union members remain and were joined on April 6 by 40 non-union workers, who elected to strike in solidarity.

Protest camp ranks have also been reinforced by workers from nearby garment factories who are members of the same union federation, the Federation of Garment Workers Myanmar (FGWM). So far, the union has chosen not to physically block the factory gates to shut down production, another common tactic in the country. A swarm of security around the factory patrols to intimidate union leaders from doing so, and many of Myan Mode’s union leaders already face legal charges from assisting strikes at other unionized factories in recent months.

After five days of sit-down protests, factory ownership finally agreed to negotiate with the union, but has refused to reinstate the fired workers.

Undeterred, the protest continues, and union leaders have begun reaching out to high-profile European brands whose goods are produced at the factory. The protesters recently traveled en masse to both the Korean consulate and the Myanmar labor conciliation office to push for reinstatement.

On April 3, the factory owner finally agreed to pay the dismissed workers their March salaries. But many union members continue to sit firmly in front of the factory gates to demand reinstatement.

“If we don’t win our jobs back, I don’t know how we can feed ourselves or our families back in our home villages,” says Moe, the union president. “If we don’t protect the union at the factory, the wages won’t be enough, the workload will destroy our bodies, and there will be no safety protections. There’s no future for us without the union.”

The minimum wage for garment workers in Myanmar is roughly $3.50 per day. Myan Mode workers, through several hard-fought strikes, won a union-negotiated agreement that provides for approximately $4.75 per day. A typical one-bedroom apartment in Myanmar industrial areas costs roughly $100 per month. The notorious dormitories employers frequently rent to workers typically demand half of their total wages.

According to workers, the union is being targeted because of its recent success addressing egregious working conditions. “With the union, we have some rights and some freedom as workers, unlike before,” said  Moe. “For example, our union won the right to ‘gate passes’ to leave the factory when we need to during work hours, whereas before we were not allowed to leave, literally locked in. We’ve also won more reasonable production targets, so our bodies aren’t quickly broken.”

More than half a million people in Myanmar work in garment factories, and a wave of strikes over the past year increased the number of garment workers in unions, to about 50,000 members. While many have hailed the growth of the industry as a sign of Myanmar’s economic development, harsh poverty persists: Myanmar’s minimum wage is near the lowest in Asia, life expectancy is the lowest on the continent, rampant sexual harassment is reported in the factories, and workers frequently live in company-owned dormitory-style slums. In a country with little to no safety net and weak labor laws, the union movement in the garment industry represents workers’ best hope of escaping lives in sweatshops and winning anything resembling decent living conditions.