“My Work Is Decent Work and I Want Decent Pay” 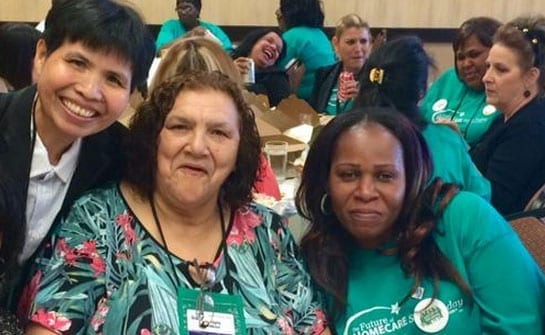 Myrtle Witbooi spent decades toiling as a domestic worker in South Africa and later built on her experience to become a national and global leader for domestic worker rights.

Witbooi made her comments in an interview on the Africa Today radio program in Sacramento, California, where she was participating in the United Domestic Workers of America/AFSCME convention. She and other domestic workers and advocates from around the world met with U.S. homecare workers last month as part of the Solidarity Center’s Multi-Regional Exchange for Domestic Worker and Migrant Worker Rights Activists and Leaders.

In connecting with U.S. homecare workers, Witbooi sought to put in play a fundamental union principle: strength through solidarity. “United, we can speak in one voice and in one language and that’s why we can win many more things for domestic workers,” she says.

In the interview, Witbooi offers an overview of the struggle by South Africa’s domestic workers to gain the same rights and protections as other workers. At one point, domestic workers chained themselves to the Parliament gates, one of a series of ongoing actions that resulted in the nation’s 2002 labor law covering domestic workers. Domestic workers went on to win unemployment compensation and a minimum wage.

Witbooi proudly says the global federation, formed in 2012, is “run by and controlled by women,” and notes its goals involve “forming organizations to empower women to be able to speak out for themselves.”

“To be able to say, ‘This is my right and I demand that you respect me as a woman and also my work is decent work and I want decent pay.’ ”

Listen to the full interview here (beginning at 19:54).