MWRN: A Champion for Migrant Worker Rights in Thailand 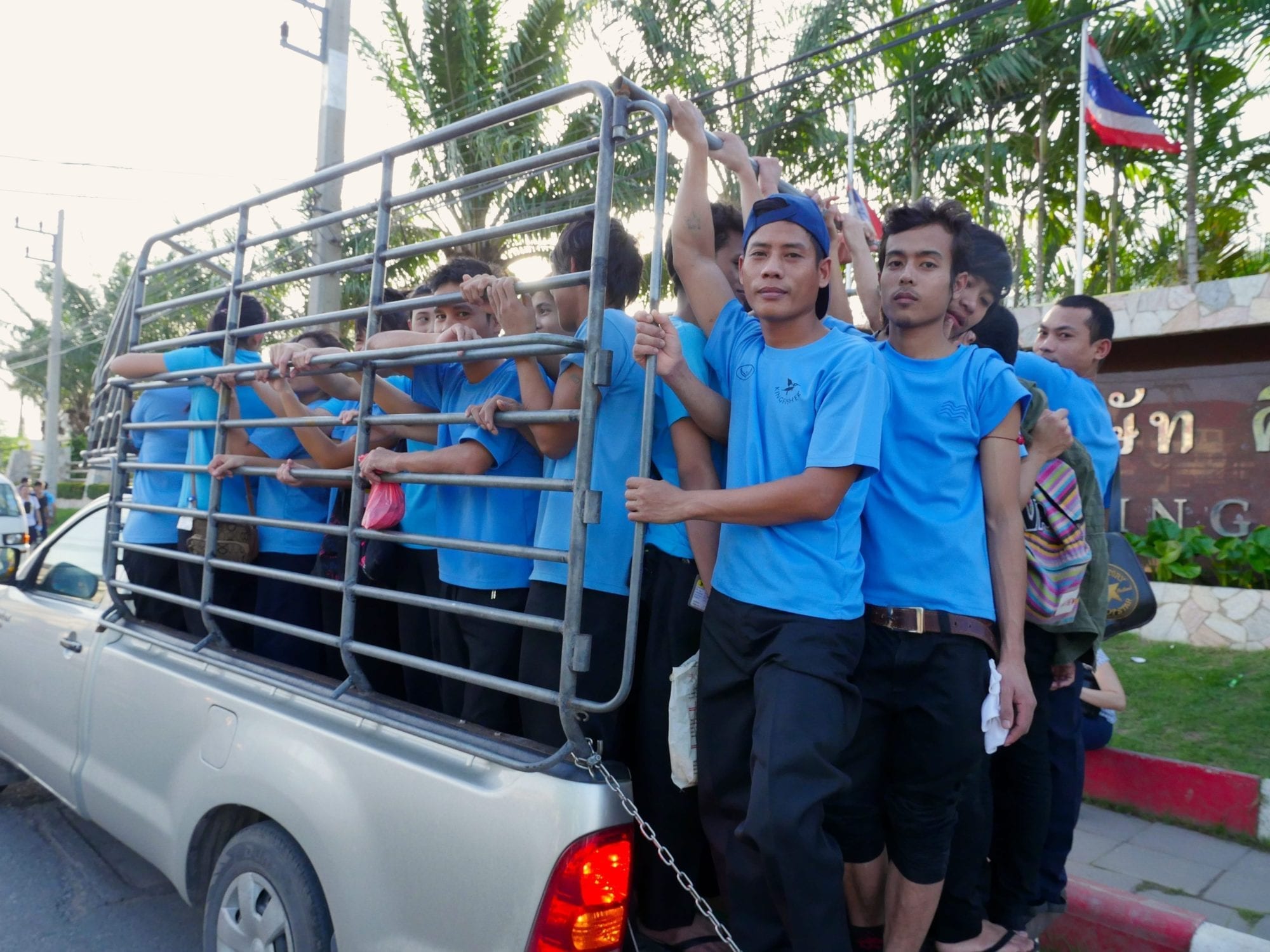 Workers on their way to a fish canning factory to start their shift. Credit: Solidarity Center/Jeanne Hallacy

Reach for a can of tuna in your cupboard and there is a good chance it was packed by a migrant worker in Thailand. In southern Samut Sakhon Province, near the Gulf of Thailand, 6,000 factories employ some of the estimated 2 million to 4 million migrant workers, and similar numbers of factories crowd other provinces across Thailand. Fueling the country’s $236 billion export industry and helping make Thailand Southeast Asia’s second-largest economy, Burmese, Cambodian and Laotian workers often toil in canning and processing factories for low pay in sometimes dangerous conditions with few rights on the job. “Hands and legs are cut off by machines and [government occupational safety] officials are not doing good job of monitoring machines for safety,” says Aung Kyaw, speaking through a translator. Aung heads up the Migrant Workers Rights Network (MWRN), a nonprofit migrant worker rights organization based in Thailand, which since 2009, has provided a crucial bridge between workers and access to legal redress for unpaid wages, occupational injuries and other forms of workplace abuse.

Migrant Workers Need to ‘Band Together’ 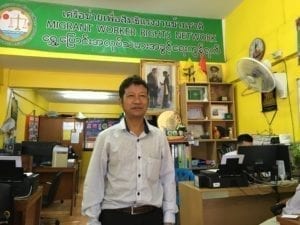 The first step in migrant worker outreach is to ensure workers are aware they have rights on the job–MWRN leader Aung Kwaw. Credit: Solidarity Center/Tula Connell

Aung, who migrated to Thailand from Kachin state in Myanmar, worked in a shrimp peeling factory where he experienced firsthand the brutal conditions many migrant workers endure to support themselves and their families “The factory didn’t pay the minimum wage, it set the target by how many you peeled,” he says. “If workers were sick, managers forced the worker to work. We worked up to 12 hours a day with no overtime.” Recognizing the need for migrant workers “to band together,” he and eight other co-workers in 2009 formed MWRN, a Solidarity Center partner. In 2013, MWRN expanded to Yangon, Myanmar. There, staff trains potential migrant workers about their rights and the labor laws to which they are entitled in Thailand, and provides them with contact information for Myanmar’s embassy in Thailand and other key resources. In 2014, the organization opened an office in Myawaddy, Myanmar, on the Burmese-Thai border.

The first step in migrant worker outreach is to ensure workers are aware they have rights on the job. Workers don’t know what the law is or how they can fight violations, says Aung. As part of MWRN’s education and outreach, its 21 committee members, who live in different regions and provinces around Thailand, visit migrant worker communities and talk with workers to explain the laws and their rights. Understanding their rights must begin before they start the journey to Thailand. Unscrupulous labor brokers scour rural villages for workers, falsely promise them high wages and charge them exorbitant fees, which they often struggle to repay on their low wages. Even if employers pay workers the legally required $10 a day minimum wage, it does not come near meeting the cost of living—for example, five pounds of rice, a basic food staple, costs nearly $2. Now aware of MWRN’s work, many often come to the office when employers violate their rights—an opportunity Aung takes to explain that because they are not alone in experiencing workplace abuse, they need to collectively join together to fight exploitation. 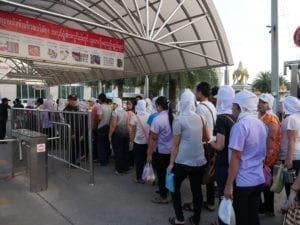 The most frequent workplace issue involves unpaid wages. In one case, MWRN gathered evidence of systemic underpayment at a processing factory and shared its findings with the employer association, which found the company violated wage laws. (Aung says at least one employer group, the Thai Tuna Industry Association, works well with MWRN and cooperates on addressing workplace issues at its member employers). But even after the government labor office ordered the factory to pay the 1,850 workers $6.25 million in unpaid wages, the company refused. MWRN and workers waged protests at the plant, and the company ultimately negotiated with workers for $2.6 million. With its new offices in Myanmar, MWRN is investigating recruitment agencies and reporting those that violate laws to the Burmese government. The group also has begun reaching out to workers on Thai fishing boats. Aung estimates laborers on fishing boats receive two-thirds of the legal minimum wage, with no benefits. Investigative reports have shown fishing boat workers often are targets of human traffickers, and then held for years on boats in slave-like conditions. An estimated 15,000 people from Myanmar alone crossing into Thailand to take up jobs each month, making Thailand home to more than 55 percent of the region’s migrant workers who are helping drive the country’s economic expansion. Thailand is funding a $55 billion project, the Eastern Economic Corridor (EEC) Act, an infrastructure and utilities development program to connect land, sea, and air through high-speed rail links, ports, and airports. As Thailand assumes the chair of the Association of Southeast Asian Nations (ASEAN) this year, migrant worker rights advocates say prioritizing migrant worker protection is also essential to ensuring the country meets its ambitious economic goals.