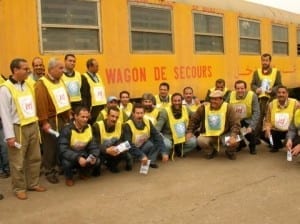 Members of UMT in Morocco back workers in Fez who are seeking to form a union. Credit: ITF

The Moroccan workers federation, UMT, is condemning an attack on workers and their families in Fez during a peaceful sit-in this week.

On July 8, security forces physically assaulted the workers, employed by City Bus, as they protested the company’s firing of workers who sought to form a union. Their spouses and children also may have been injured, according to the International Transport Workers Federation (ITF). In addition, police arrested two UMT staff, Aziz Bounar and Ahmed Nacer.

The workers say that after City Bus was contracted to manage urban transportation in Fez last September, working conditions have deteriorated and their efforts to form a union have been met with strike-breaking and the use of police to remove striking workers.

The City Bus workers have received support from transport unions, which joined in solidarity rallies with the workers this spring, and the ITF, which has written to the Moroccan government to call for justice for the workers.

The UMT says it “strongly condemns this violent attack on innocent workers,” and is demanding that “the government and the public authorities intervene urgently to release the persons arrested and to reinstate the sacked workers to their jobs.”