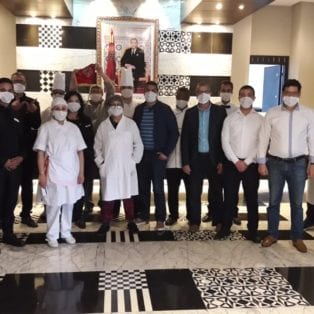 Unions throughout Morocco are negotiating wage guarantees and other measures to safeguard the livelihoods of the tens of thousands of workers in the country’s hospitality industry—cooks, wait staff, hotel cleaners, tour operators—who have been furloughed or lost their jobs as travel and tourism shut down due to the COVID-19 crisis.

“Workers in the tourism sector have suffered from this pandemic, as the tourism season had just begun in a number of regions, and the infections led to mass cancellations even before the government of Morocco introduced containment measures at a national level,” says Naima Hilali, a staff member of the hotel union affiliated with the Union of Moroccan Workers (UMT) who works at Hotel Lulido in Casablanca. “The hospitality sector will face a massive challenge in recovering for many months or up to a year after the crisis.”

Backed by the UMT, workers say they will not take unpaid “holidays” during furloughs and are demanding a three-month wage guarantee until June. Unions also are negotiating three-months’ wages for temporary and seasonal workers and are assisting laid-of workers employed by subcontracting agencies in getting necessary documents to qualify for a $200 monthly support payment from Morocco’s social security fund. Some subcontractors have not submitted documents needed for workers to benefit from the fund, created for private-sector workers who lose their jobs due to the coronavirus.

“The very strict requirements of collecting unemployment benefits means that many workers will not benefit from the allowances,” says Mohamed Aji, union general secretary at Hotel Farah.

Unions also are negotiating with employers to ensure safety measures are in place for workers still on the job and are reaching out to workers with information on protecting themselves against the coronavirus.

“UMT shop stewards have taken measures to sensitize workers on the necessary precautions and health measures developed by the Ministry of Health,” says Zakaria Himer, general secretary of the union at Hotel Sofitel. “Other measures include adopting work rotation to reduce the number of workers at the workplace, and giving priority to people with immunity diseases.”

Travel and tourism contributed some seven percent of Morocco’s GDP in 2018, and the likely long-term closure of hotels, restaurants and tour operating companies across the country mean workers will need considerable support for many months.

“The government is making a significant effort through establishing the fund, but this solution does not respond adequately to the massive needs of workers,” says Hilali. “This requires a social and legal strategy to support the workers and employers in the sector. So, we demand the state and public officials to intervene to rescue the sector and its workers.”