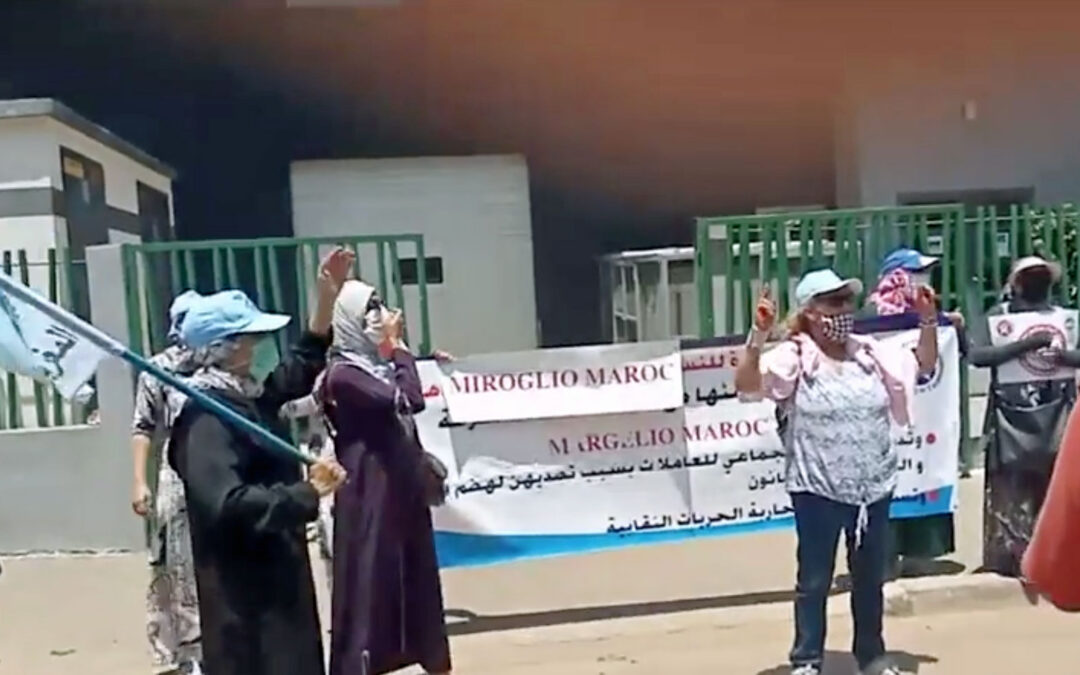 Garment workers rally in Morocco in solidarity with co-workers fired after reporting lack of protections against COVID-19. Credit: UMT

Garment workers at the Miroglio Maroc factory are standing strong with 14 co-workers who they say were fired for speaking out against the lack of sufficient safety gear and other protective measures at the workplace during the novel coronavirus pandemic.

Three workers were recently diagnosed with COVID-19, and the 14 fired workers alerted authorities to the unsafe working conditions at the plant, where up to 250 workers make ready-wear garments. The employer says he fired the workers, eight of whom are union members, for “defamation,” that is, allegedly attacking the reputation of the company.

Yet the Moroccan Labor Union (UMT) says the owner also fired workers who took part in forming the factory union in April. The employer also sought to intimidate the 14 fired workers, all of whom worked at the factory between five and six years, by calling in a judicial commissioner, a move the UMT says violates Morocco’s labor law. Their union, the Union Office of Miroglio Marco, is affiliated to the Federation of Garment, Textile, and Leather Workers/UMT.

Factory union leaders say the employer refuses to pay the fired workers for May and June, and demanded they sign a statement saying they will not strike, a move prohibited by the country’s labor law. Further, union representatives say the general manager has verbally harassed women garment workers who requested safety and health protections.

Workers now are waiting for the results of their COVID tests, which the company was forced to undertake after the workers alerted authorities.

Employers worldwide are penalizing and even firing workers who demand their rights to safety measures to protect against COVID-19, and are using the pandemic to lay off workers, often targeting those seeking to form unions or exercise their rights on the job. But, together with their unions, workers are fighting back.

Clapping as they rallied outside the plant in Casablanca’s Albarnoussi industrial district in recent days, the workers chanted, “We do not want injustice, we do not want to strip women of their rights.”