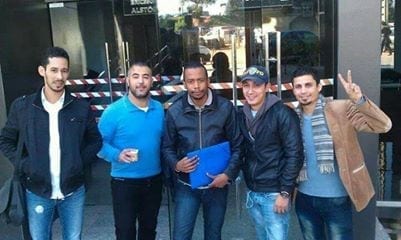 Five workers fired from their jobs last month at a call center in Casablanca, Morocco, are receiving strong support from their co-workers and their global union movement. (Read more from Labour News Network.)

When the five operators reported to work February 13, they were met by a court bailiff and informed they had been fired. The action came days after the workers formed a union with the Moroccan Labor Union (Union Maroccaine du Travai, UMT), one of the country’s oldest trade unions. (You can support the five fired workers by signing a petition launched in partnership with the Union Marocaine du Travail (UMT) and UNI Global Union.)

Per Moroccan law, the workers had first notified government officials that they had formed a union and then notified their employer after receiving administrative recognition. Although freedom of association is a fundamental human right guaranteed by Morocco’s Labor Code and the country’s constitution, the workers now must take their case to court.

“The situation is catastrophic. This sector is not regulated by social dialogue. There is a lack of collective agreements and bargaining rights,” said Mohamed El Ouafi, executive board member of the UMT, and national coordinator of Call Center Workers. He told the Moroccan news publication, La Libération, that most employees live their lives in constant fear of being dismissed for lack of social protection.

Co-workers of those fired held a sit-in at the Ministry of Employment and Social Affairs and have waged multiple rallies in support of the men. The AFL-CIO sent a letter to Moroccan Prime Minister Abdel-Ilah Benkirane urging the government to uphold the country’s constitutional guarantees of labor rights.

The French-owned Total Call operation offers educated and skilled working women and men much-needed jobs—but as the AFL-CIO wrote, the government must send “a firm message to employers that respect for the law is mandatory.”