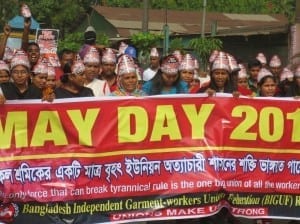 More than 100 years ago, workers striking for an eight-hour day and living wages declared May 1 an annual date for international labor rights to honor workers and raise awareness of their struggles.

Around the world, many workers are still fighting for those basic rights. In Bangladesh, garment workers seeking to make their workplaces safe are forming unions, despite sometimes formidable odds, including violent attacks against workers and organizers.

Since last year, after the collapse of Rana Plaza and when garment workers began a serious push to organize and seek official recognition of their unions from the government, more than 100 unions have been registered. In the three years prior, only two unions were allowed to register.

“Now that we have a union, if (wage) payments are delayed, we can find out what the problem

is and work can go on,” said Rumi Akhter, a union leader. Rumi and her co- workers recently formed a union at a Weltex apparel factory in Dhaka, the capital (see video).

he Solidarity Center has been bolstering worker rights defense efforts in Bangladesh—including providing safety and health training, legal support and union building—for years. It recently established an emergency fund to help organizers and worker activists injured or otherwise harmed as they fight for better wages and working conditions. The country is one of dozens where the Solidarity Center assists local unions, worker centers and community groups to empower workers on the job and in civil society.

“In low-wage economies in general, companies find little reason to protect the rights and interests of workers—and corporate self-regulation has proven a faulty tool for ensuring healthy and dignified workplaces,” says Alonzo Suson, Solidarity Center Bangladesh country program director. “Without the relative strength of a union to represent them, vulnerable and impoverished workers cannot fight alone for their rights.”

May Day is a time to celebrate the historic achievements of trade unions. And as the International Trade Union Confederation (ITUC) points out, it is especially a time reaffirm our commitment to organize workers everywhere and support their fights for: freedom of association and collective bargaining; mnimum wages on which workers can live; universal social protection; and safe, healthy and sustainable jobs.