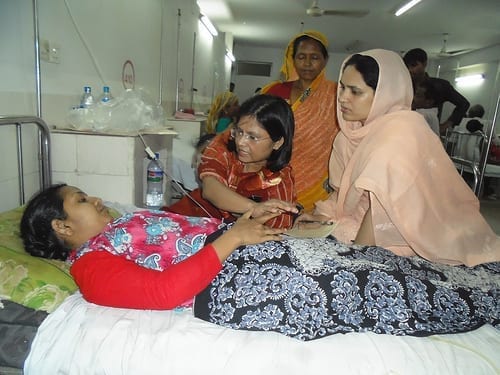 In the hours and days after the multistory Rana Plaza building collapsed in 2013, killing more than 1,100 garment workers in Bangladesh, Solidarity Center Senior Program Officer Lily Gomes was an ever-present figure in the hospitals, where she went from bed to bed checking on injured workers and offering support. She also visited workers at their homes, to offer assistance and to document details of the world’s deadliest garment factory disaster. 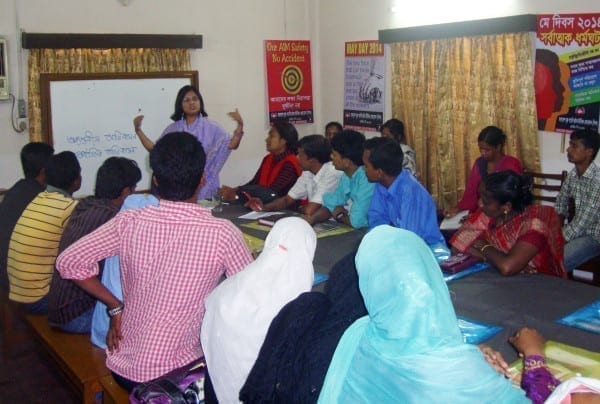 Providing emergency aid is one of a multitude of duties Gomes has undertaken since joining the Solidarity Center’s Dhaka office in 1996. Trainer, union organizer, curriculum developer, gender specialist and financial program monitor—over the years, Gomes has carried out these roles and many more, earning a doctorate in sociology from Jadavpur University in India along the way. Now, she has a new title: Fellow at the National Endowment for Democracy in Washington, D.C.

“This is the time clearly to focus on women garment workers to have them in leading positions,” Gomes says of her plans while in residence. During her five month-long Reagan-­Fascell fellowship, she will develop a gender policy guideline for advancing women’s leadership among trade unions within Bangladesh’s ready-made garment (RMG) industry. “This is the time for women to express their voices.”

She brings to the fellowship a rare range and depth of experience. Gomes was among Solidarity Center staff aiding garment workers forming their first women-led union in 1996. “I was with them day and night,” she says, recounting the long hours involved in creating the Bangladesh Independent Garment Workers Union Federation (BIGUF), a milestone achievement not only for worker rights but one that “initiated the idea that women should be the main leadership to reflect the workers in the RMG industry in Bangladesh.” 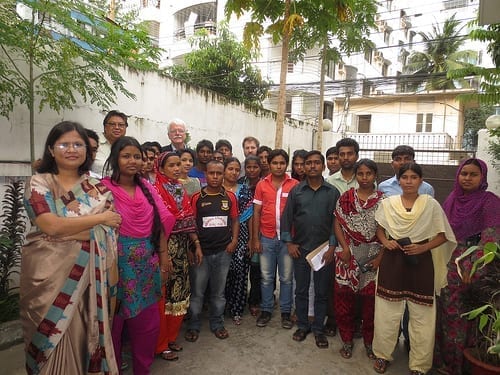 In those years, child labor was rampant, and Gomes describes how factory owners would hide children in boxes or even toilets when inspectors arrived. Passage of the Child Labor Deterrence Act of 1999, long championed by former Sen. Tom Harkin, “was a huge thing for Bangladesh that assisted in complete elimination of child labor from the sector at the time,” Gomes says. The bill bans the importation to the United States of products that are manufactured or mined with child labor.

Following the law’s passage, Gomes helped the Solidarity Center set up and run schools for former child laborers “with a unique curriculum to address their needs,” a project that continued through 2002.

“The children were happy,” Gomes recalls. “They started relaxing. They learned not only academics but social issues,” including health and hygiene.

Gomes was coordinator of Solidarity Center-sponsored health clinics offering primary medical care for garment workers and their families. Over the years, she has provided workers with training sessions on topics as varied as labor law, financial management and collective bargaining negotiations. She also conducts fire safety training, a program the Solidarity Center pioneered for garment factory workers in 2000. In addition to helping garment workers unionize, she has assisted shrimp workers to organize and exercise their rights in seafood processing factories in southwestern Bangladesh.

Now, much of her focus is on empowering women garment workers to take on leadership roles and understand their rights to better advocate for themselves and their families. Although women comprise more than 90 percent of garment factory workers, during negotiations at unionized plants, “Women’s issues are sidelined in negotiations,” Gomes says.

In 2000, Gomes administered four Solidarity Center-sponsored Working Women Education Centers, where lawyers trained female factory workers on their rights regarding sexual harassment at the workplace, family leave and other issues important to women. Since then, she has reached hundreds of women workers through trainings on women’s labor rights and gender equality.

“Now, many of these Solidarity Center-trained women are leaders of other union federations,” Gomes says. “It’s a great feeling to know I trained them.”

In the late 2000s, she commuted for several years to India’s West Bengal state, to work on her Ph.D., which focused on the impact of employment and earning opportunities on female workers in Bangladesh’s RMG sector.

Beyond her organizational skills, educational background and talent for expertly taking on a broad range of tasks, Gomes brings to her work a compassion and deep understanding of humanity that sets her apart.

Recalling the hours after the Rana Plaza disaster, she describes visiting a school where bodies, nearly all young women, were laid out in row after row.

“I touched their hands and feet,” she said, “and felt like they were my sisters.”