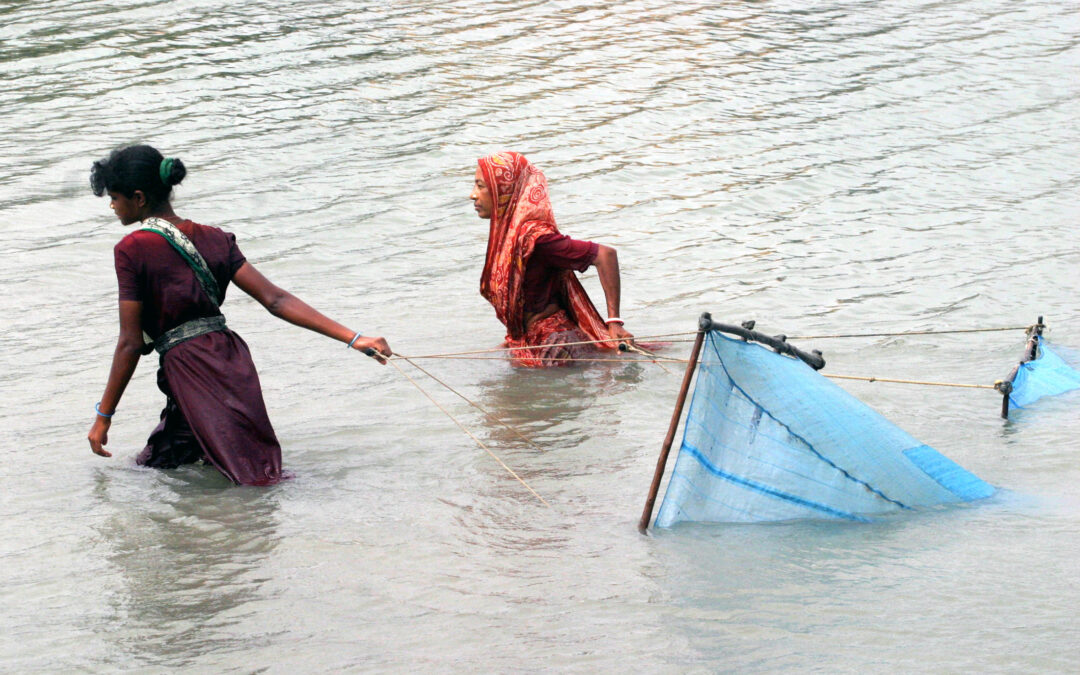 The livelihoods and safety of these women fishing shrimp from a river southwest of Dhaka are increasingly threatened by climate change. Given that 80 percent of Bangladesh’s land is low-lying floodplain, seas are rising and area cyclones are escalating in frequency and severity, one in every seven of the country’s people will be displaced by climate change by 2050. Credit: Reuters/Rafiqur Rahman – stock.adobe.com

Climate change and environmental degradation have exacerbated gender inequality and worsened existing inequities resulting from resource scarcity, conflict and climate-related shocks. Women workers—particularly those in the informal economy—bear significant burdens due to the impacts of the climate crisis.

Trade union women, activists and advocates gathered on March 17 for a virtual panel to discuss the impacts of climate change on women workers and the importance of their inclusion in developing climate solutions. The panel was sponsored by HomeNet International, HomeNet South Asia, International Trade Union Confederation (ITUC), Rutgers Center for Women’s Global Leadership (CWGL), StreetNet, Women in Informal Employment: Globalizing and Organizing (WIEGO), the Global Alliance of Waste Pickers and the Solidarity Center.

Sonia Mistry, Solidarity Center Global Lead on Climate Change and Just Transition, moderated the panel. She framed the discussion, saying, “There is no denying that the impacts of climate change are already being felt around the world, with many of the worst impacts being experienced by those who have contributed least to the problem.” Mistry outlined the panel’s objectives, including highlighting the impact of climate change on women workers, emphasizing the role of workers and their organizations as critical partners in driving worker-responsive climate solutions, and recognizing that climate action requires coalition-building across social movements.

Navya D’Souza, Regional Coordinator for HomeNet South Asia, spoke about how climate change affects women workers in South Asia, where her organization represents 900,000 workers, 95 percent of whom are women. “Climate change is also a very, very gendered issue,’ she said. And home-based workers are seeing “an exponential increase in their already unfair burden of care work. This affects their ability to participate in the labor market.”

D’Souza said climate change also means more dangerous working conditions for home-based women workers. “Heat is rising, and because heat is rising, it affects our productivity,” she said. “We cannot work when it is too hot, and in urban settings, we live in crowded slum settlements. There is no respite from the heat, and we can’t go outside and work because it’s hot outside as well.”

D’Souza said HomeNet South Asia studied the impacts of climate change in South Asia by reaching out to 200 women across five locations in Bangladesh, India and Nepal. The study found that:

A home-based worker focused on tailoring, pearl stringing and applying Kundan stones on fabric work, Sushma Mishra spoke of how climate change has impacted her work. “The roof of my house is made of cement, so it is very hot,” she said. “We face a very difficult situation in cold weather. It is very cold so we have to use electricity when working inside the house. We have to use lights. And there is no ventilation. There are no windows in the house. So that is a major challenge we are facing.”

Due to climate change, the frequency and severity of natural disasters also impact women workers. Albertina Simango, Vice President of Associação da Economia Informal de Moçambique (AEIMO) said, “Here in Mozambique particularly, because of the country’s geographic location, we have been suffering many natural events provoked by climate change. Just to give you an example, in less than 20 years, we have been hit by more than 15 climate events.”

Natural disasters, Simango said, have caused a steep increase in the growth of the informal sector. “Unfortunately, women are the base of the pyramid. The vulnerability of informal women workers is so bad that even children are affected,” she said. “I feel very sad to see women who lose everything they had because of climate events, and afterward they have to have their children negotiate and do business to help support the families.”

Additionally, women workers often work longer hours and face violence and harassment due to traditional gender roles.”They have to work very, very long hours to support their families. Some of them have to work 18 hours a day. This means getting up at 5 a.m. when it’s still dark and going back home at 9 p.m.”

According to Rina Begum, President of the Bangladesh Waste Pickers Union, environmental workers like waste pickers get short shrift. “Waste pickers keep the city clean, but they don’t get good prices. We have no value. If the government provided jobs, we could have a better life.”

In Brazil, Carmen Helena Ferreira Foro, secretary-general, Central Única dos Trabalhadores (CUT), said that the effects of climate change are exacerbated by industrial projects that do not consider the impact and are slow to benefit indigenous populations. “Everything is interconnected,” Foro said, “deforestation, water problems, rains — all the causes and effects of climate change impact the livelihoods of indigenous populations.”

“I am a family farmer from a part of the Amazon. I have to daily live with large projects in the Amazon region. They do not consider people’s lives. They exploit them and never redistribute the meaning of this energy,” she said.

“It took us 20 years to get any energy after they built a dam,” she said. “And now we are undergoing a new phase of building a waterway in the same river that was already affected.”

Sharon Bhagwan-Rolls, Regional Manager of the Shifting the Power Coalition, wrapped up the discussion by emphasizing the importance of including women workers in planning responses to climate-related disasters. “We’ve been working to ensure that women who have the knowledge, skills and capacity can articulate their needs and be at the table as they want to, and to be able to lead in disaster planning and response.

“The response aspect of disaster management is critical because the economic strategy, the recovery strategy, is vital at that stage,” Bhagwan-Rolls said. “The post-disaster needs assessment requires the feminist analysis, requires the visibility of women, particularly women workers in all the diversities presented by the speakers today.”