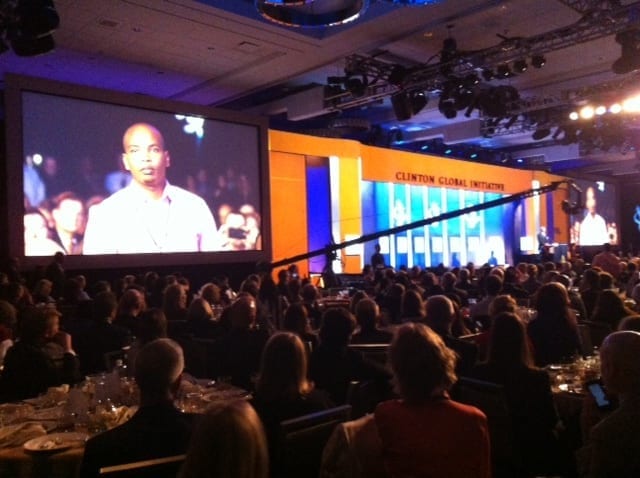 When President Obama spoke yesterday at the 2014 Clinton Global Initiative about the value of civil society and the necessity of developing young civil society leaders, the first person he recognized as contributing to the development of his community was Solidarity Center fellow and Kenya social justice activist Walid Ahmed Ali.

Commending him for his work creating jobs at the Kenya-Somali border for unemployed youth, Obama said Ali told him he “strives not just for the idea of democracy,” but “to cement the practice of democracy.

“We thank you Walid for your extraordinary efforts and we stand with you,” the President said.

Ali has been in the United States for the past four months, where he spent the first six weeks at the University of California-Berkeley on a Mandela Washington Fellowship through the Young African Leaders Initiative. He then won an internship through IREX, enabling him to work for the past two months at the Solidarity Center.

Ali, who founded the Lamu Youth Alliance, offers jobless young workers counseling, business classes and small plots of farm land to support themselves in their communities in and around Lamu.

Just off Kenya’s eastern coast, the Lamu archipelago is an environmental oasis where farmers and fishers maintain the livelihoods that have supported their families for generations. Yet a government initiative to turn the area into a massive transportation hub while bringing in tens of thousands of overseas workers to build and operate it, threatens to displace Lamu residents, wreak havoc with the environment and damage the cultural heritage of Lamu Old Town, a World Heritage site UNESCO describes as “the oldest and best-preserved Swahili settlement in East Africa.”

“The indigenous community was evicted for the project and there was no compensation, no training for other jobs,” Ali says. The Lamu Youth Alliance joined the Save Lamu network, a coalition working to develop a bio-cultural community protocol (BCP) to document community practices, rights over communally managed lands and traditional knowledge.

Ali, 29, returns Saturday to Lamu, where he will continue his efforts to push for job creation, especially for the country’s young workers, the vast majority of whom are not employed in the formal economy. Unemployment in Kenya stands at 40 percent, and 70 percent of people unemployed are young workers between the ages of 15 and 35.

Yet despite the country’s dire need for jobs, Ali says half of the 1.5 million workers who will be employed on the Lamu Port Southern Sudan Ethiopia Transport corridor project (LAPSSET) are expected to come from China. The project, slated to become Kenya’s second largest transportation hub, did not go through a procurement process, Ali says, and the wages for the project’s workers do not meet the country’s minimum wage laws.

“I am not against the project, but I want the project to be done according to protocol,” he says.

Ali, who ran for public office last year in his local ward—coming in second among 12 candidates despite being significantly outspent by the winner—will continue working toward his bachelor’s degree in development at the Technical University of Mombasa in Kenya, where he attends classes at night. During the days, he plans to carry on his work with youth by empowering them with leadership skills, increasing their understanding of sustainable development and promoting their rights with the goal of bringing positive change to Kenya.

“My concern is to promote social rights and justice and also gender equality,” he says. “I want to be a good leader with a very strong potential for assisting my community.”