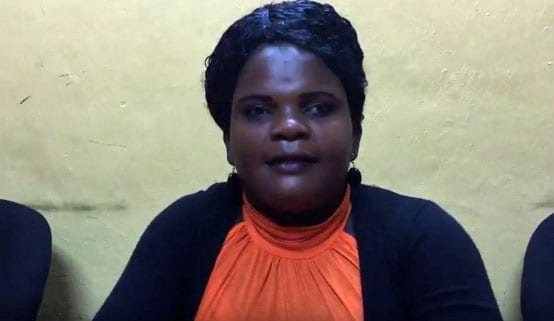 Like many women in Mombasa, Kenya, Alice Mwadzi says for years she barely eked out a living. A lack of jobs in the port city for many means a constant struggle to survive—selling fruit on busy highways or hauling carts stacked with heavy water containers through congested streets—involving long hours of often back-breaking work for nearly no pay.

“I was suffering so bad,” she says, remembering the time in 2012 when, desperately trying to support herself and three children, including a newborn son, a labor broker approached her. “He told me, ‘Alice, there is a chance you can change your life. You can go to the Middle East and have a different life so you’ll be a rich person.’”

To support her children and pay for their education, Mwadzi made the hard decision to leave them behind and become a domestic worker in Saudi Arabia.

“I was sure after two years, I’d have a change in my life. It was my only hope in life,” she says.

Without the Union, ‘I Don’t Know Where I Would Be’

But before she traveled, an organizer from Kenya Union of Domestic, Hotel, Educational Institutions, Hospitals and Allied Workers (KUDHEIHA) came to her house and invited her to a three-day training workshop. There, she learned how to educate domestic workers about their rights in Kenya and abroad. Ultimately, she became an organizer with KUDHEIHA, a Solidarity Center ally.

“If not for KUDHEIHA, I don’t know where I would be,” says Mwadzi. “They taught us how to get jobs organizing—to educate domestic workers on their rights.” Women traveling abroad for jobs as domestic workers are vulnerable to exploitation by labor brokers who sell them on false promises, and once in an employer’s home, often are subject to physical, sexual and mental abuse, forced to toil up to 20 hours a day, seven days a week.

Over the past five years, Mwadzi signed up 200 domestic workers with the union and helps women seeking to go abroad get jobs in Kwale, a town southwest of Mombasa, where she is based. “I go door to door to give them hope,” she says with pride.

Kenya is not unique. The informal economy accounts for more than half of the global labor force, and most of the jobs do not pay enough for workers to support their families. Workers in the informal economy often face dangerous working conditions, with no health care or other social protections, and have no job security.

Living in extreme poverty despite working long hours, such workers are vulnerable to exploitative labor brokers, some of whom are their relatives or friends, whose offers of employment in countries like those in the Middle East frequently are based false promises. In Kenya, women signing on for domestic work in Saudi Arabia were told they would receive 23,000 Kenya shillings ($221) a month, only to find the pay significantly less and the working and living conditions inhumane.

In Kenya and around the developing world, labor brokers haunt villages, towns and cities, preying on women and men trying to support their families and make a better life for their children. Unscrupulous labor brokers will not show workers their contracts until they are at the airport or bus station, and frequently, the contracts are written in Arabic or a language the workers cannot understand. When they arrive at their destination, the contracts may even change.

Although Kenya recently passed a law regulating labor agents, KUDHEIHA leaders say the law is rarely enforced, and the union is pushing for better enforcement. KUDHEIHA also is working for laws that make it mandatory for informal economy employers to pay into the country’s social protection funds.

In a series of recent interviews in Mombasa, workers who returned from the Arabian Gulf describe their experiences working abroad and the conditions that drove them to grasp for the glimmer of hope they thought would improve their lives. They spoke out, sometimes choking through tears, because they want others to learn from their struggles and because, they say, they never want anyone else to endure what they did.

These are their stories.

‘When My Children Spit on You, Don’t Complain’

When Mwahamisi Josiah Makori arrived in Saudi Arabia in 2014 at the home of her employer, she was given 20 minutes to rest before beginning her duties as a domestic worker. Her employers held their noses when they greeted her and made her shower outside before allowing her in the house.

Her responsibilities involved cleaning two homes, including that of the employer’s mother-in-law. She was required to take care of the children, and when they spit on her, her employer told her not to complain. She was up all night caring for the baby and by 6 a.m., preparing the family’s breakfast.

She was given a torn, dirty mat to sleep on, and when she requested a new mat, her employer refused, telling her she was only there for work. In the middle of her tasks, she was required to stop and flush the toilet after a family member used the bathroom.

Makori was required to hold the baby throughout the day as she cooked, cleaned and cared for the other children. One afternoon, when she put the baby down to store groceries, the baby crawled to a cabinet. Alarmed, she called out. Her employer began beating her, saying she was making the baby nervous. They took her to the police authorities and told them she slept all day and refused to work.

She finally was able to convince the police of her plight, and an officer told her employer to pay her way home. The employer refused, but  the employer’s mother-in-law paid her way to Kenya.

In Kenya, Makori had struggled to support her three children as a single mother. She was desperate for paid employment when her best friend introduced her to a labor broker who was traveling from village to village. Makori could not afford to pay her children’s school fees, and says she felt she had no choice but to leave the country for work.

After three months of nearly non-stop labor in Saudi Arabia, Makori returned to Kenya. Without pay.

The Promise of a Tailoring Job Turns to Horror

At the urging of her mother, Noor (name changed to protect identity) signed up with a labor broker in 2014 to work in the Arabian Gulf. A seamstress in Mombasa, she made it clear to the broker she wanted to continue her profession abroad. Her sister suggested they travel together and work in the same house. So they met with an agent who promised they would stay together, and they made the journey to Saudi Arabia.

At the airport in Saudi Arabia, all the Kenyans migrating for work were taken to a room where the agent called their names, one at a time, to leave with their employer. Her sister’s name was called, and she left. Noor remained behind. Finally, a man called her name. He took her to an employer whose compound included two businesses, including a tailoring shop. Her sister was not there.

At first, Noor worked as planned in the tailoring shop. But one day, she was asked to model for a group of women. She was very uncomfortable doing so, but agreed. As she walked for the women, they touched her, making her even more uncomfortable.

Days later, a woman named Lucy, who also worked at the house, told her to prepare for a visitor. She offered Noor a drink into which she had slipped a drug. Five men came. Ali managed to fight them off. But when they returned, they stripped her, tied her to a bed and four men raped her. The first was her employer.

Later, Lucy came to her and said she would be paid extra because she had been a virgin.

Lucy helped her escape. She gave Noor a passport and a ticket and hid her in the trunk of a car for five hours. Ultimately, Noor made it to the airport and flew home.

Three years later, Noor is still so traumatized by the events that she cannot stop crying as she describes what happened to her in Saudi Arabia. She says she is no longer the independent spirit she had been before she migrated for work. She no longer sings and plays music. Yet she summoned the strength to tell her story, she says, so no other woman will experience her horror.