Union leaders tell the Solidarity Center that the Kazakhstan government has launched a campaign to intimidate union members and to malign and discredit the Confederation of Independent Trade Unions (CFTUK). In addition, the regime has initiated legal action to liquidate the confederation, while leaving intact a government-aligned federation.

Yet even in the face of threats and danger, union leaders and workers say they vow to hold protests if the CFTUK is dissolved. 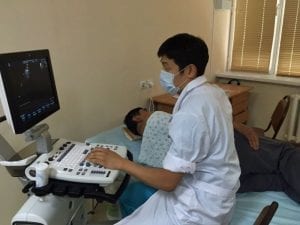 The Kazakhstan government is seeking to dissolve unions of health care workers and others. Credit: Kazinform

The Kazakhstan Ministry of Justice brought a legal challenge before the country’s Economic Court calling for revocation of CNTUK’s registration and its affiliated unions representing health and domestic workers—essentially making union activity illegal.

In a letter, the International Trade Union Confederation (ITUC) denounced the government’s failure to guarantee the right to freedom of association and called on it to withdraw the request before the Economic Court.

A new report also shows Kazakhstan’s new trade union law, adopted after strikes in 2011, has made it more difficult to organize independent unions in the country. “Changes to the labor and criminal codes have contributed to an environment hostile to worker activism,” according to Human Rights Watch, which released the report.

“‘We Are Not The Enemy’: Violations of Workers’ Rights in Kazakhstan” is based on interviews with more than 50 trade union leaders, labor activists and workers across Kazakhstan, and describes harassment, surveillance and, in some cases, spurious legal prosecution or dismissals in apparent retaliation for labor activism.

The International Labor Organization has examined the government’s failure to guarantee the right to freedom of association and in 2015 and again this year urged it to amend laws regarding union registration. The government has not acted on these recommendations.