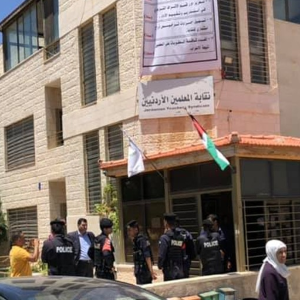 Teachers in Jordan oppose the government's move to shut down their union. Credit: Education International

Teachers in Jordan are “insisting on their legal rights to have an association” and will not give up after the government dissolved their union in July and imprisoned union activists, says Kefah Abu Farhan, a board member with the Jordan Teacher Association (JTA).

“Teachers, male and female, stress day after day that these measures are not acceptable for us and we will not back down until the teachers association goes back to its legal standing,” said Abu  Farhan, speaking recently with the Solidarity Center through a translator.

The JTA, representing 140,000 active members, waged a month-long strike in 2019 when the government failed to respond to its demand for a 50 percent salary increase. As a result of the strike, teachers received a 35 percent wage increase and 14 additional improvements, the most important of which was the union’s participation in managing the teachers’ savings fund, with its assets totaling more than $141 million.

In July 2020, police raided JTA headquarters in Amman, the capital, and 11 of its branches across Jordan and jailed thousands of teachers, including JTA chairman Nasser Nawasreh. The teachers, some of whom went on a hunger strike, were released after spending a month in prison. Many are still being prosecuted in court, says Abu Farhan. In addition, the government forced 62 teachers to take early retirement “as punishment for expressing their views,” said Hala Ahed, a lawyer on the JTA’s legal team, speaking with the Solidarity Center. The government dissolved the JTA for two years in December 2020 and imprisoned its board members for one year.

The Jordan government’s move to shut down the JTA was denounced by the global labor movement and human rights organizations worldwide. The United Nations Human Rights Commission said the action is “emblematic of a growing pattern of suppression of public freedoms and the restriction of civic and democratic space by the Jordanian government, including against labor rights activists, human rights defenders, journalists and those who have peacefully criticized the government.”

In October, Jordan authorities barred the JTA from holding a press conference to discuss the conditions teachers are experiencing, a ban implemented by security forces delivering an order from the Amman governor.

Jordanian civil society organizations and unions drafted a solidarity letter condemning measures targeting the right to form unions and other civic freedoms. The JTA’s success in winning the government’s agreement to sign a collective bargaining contract, and the strong stance of teachers demanding their rights, attracted broad public support. The government shut down the JTA in part because it “has become ground zero for those who want to gather, for the middle class to voice their dissatisfaction,” says Ahed.

“There is a symbolic message sent here: Officials can encroach upon constitutional freedoms and escape punishment,” she said. “This could be indication that the upcoming period will be one of oppression, suppression, restraining freedoms in very blunt manner. This is very dangerous.”

Reversing the Gains of the 2011 Arab Uprising

The teachers’ union was established in 2012 after the Jordan monarchy issued a royal decree, reviving the union suspended in the 1950s. Expanded freedom to form unions was among some of the civic freedoms working people championed and won during the 2011 Middle East and North Africa Arab uprisings. In 2011, Jordan amended its constitution, giving political parties and unions the right to form.

Teachers had fought for their rights to form unions and collectively bargain for decades, with many imprisoned in 1975 for setting up committees to create a union. After a new teacher’s movement arose in the 1990s, they were barred again from unionizing when the government cited the constitution to justify its refusal to recognize a teacher’s union.

The victories of 2012 “occurred because of the sacrifices of workers,” says Abu Farhan. “It’s very dangerous, very dangerous, for unions to lose their rights.” Although the country’s constitutional court has recognized International Labor Organization Convention 87 on the right to freedom of association, the government has not yet ratified it.

The government shuttered the JTA after it asked members on Facebook to weigh in on how to ensure the government follow up with its promised pay increases. One of the suggestions called for sit-ins and demonstrations, and proposed activities also included thinking about participating in or boycotting national elections.

The JTA did not commit such a violation of the law because it did not call for an election boycott and calling for demonstrations is not illegal, says Ahed. “There was no criminal act,” she said. “The criminal act under this count only applies to physically preventing people from coming to vote.” During the court trial of JTA Board members, no witnesses were allowed for the defense, she said.

“When the JTA is no more, we go back to pre-2012 days,” Abu Farhan said. “Teachers have to claim their rights, lobby, advocate for their rights. On top of that, we have deteriorating conditions of teachers and their difficulty in retaining top-notch performance. We go backward regarding future reforms in Jordan.”

Yet as Abu Farhan said, teachers will not be silenced: They protested in January even as Jordanian security forces barricaded the roads leading to the Jordan legislature in Amman. The government also placed a metal fence around an open area opposite the parliament in an attempt to prevent large gatherings.

Throughout their protests, teachers carry signs supporting the freedom to negotiate for better wages and working conditions through their freely formed union: “My union is a national achievement that Jordanian teachers will not give up on,” and, simply, “Bring back the teachers’ union.”