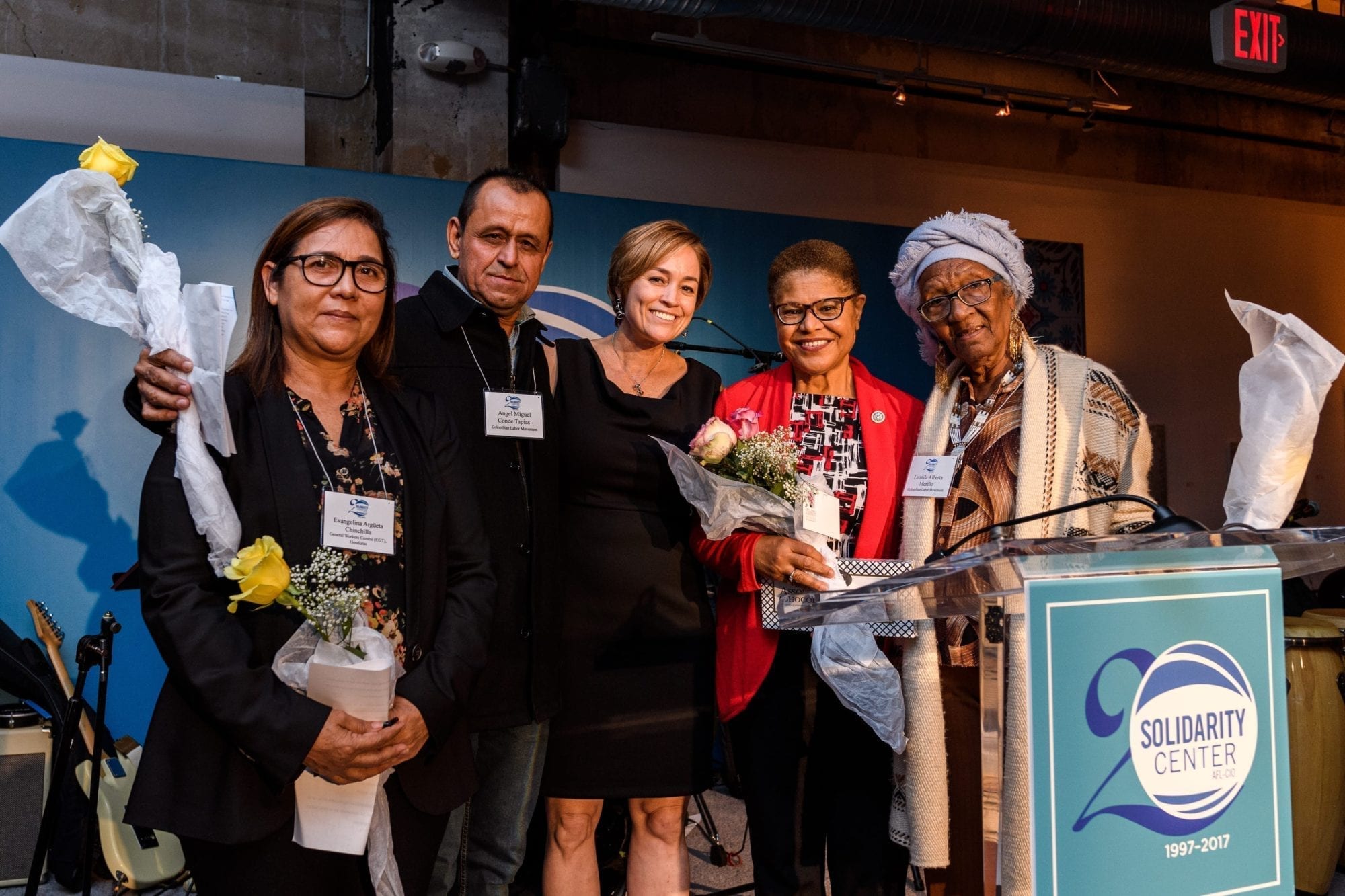 Some 300 allies, coalition partners and sponsors of the Solidarity Center packed the Longview Gallery in Washington, D.C., last night to celebrate the organization’s 20th anniversary. The day began with a book launch and discussion on informal workers and collective action. 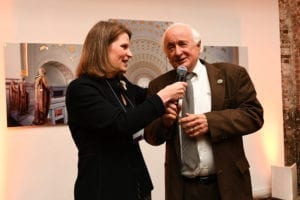 “The energy in the room is fabulous and I couldn’t be prouder to be a part of this important occasion,” said AFL-CIO Secretary-Treasurer Liz Shuler, who hosted the evening’s program.

“The work of the Solidarity Center is critical to unions around the world and also so important to our American labor movement,” she said. “The Solidarity Center reaches half a million workers a year with programs that expand access to justice, and boost organizing and advocacy skills for workers, unions and their allies. And we need to join together across borders, now more than ever, to make sure we are raising standards for all workers everywhere.”

Honored guests included members of the Colombian and Honduran labor movements, and U.S. Sen. Sherrod Brown, who could not attend because of a last-minute vote in Congress. In a statement read at the event, Brown said: 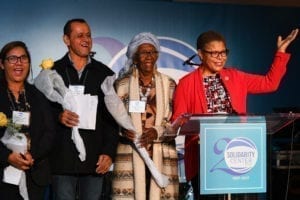 “In 2016 alone, the Solidarity Center supported Tunisian government worker’s fight to get raises. You helped to add nearly 1,000 new members to the El Salvador sugar cane union. And through your efforts, nearly 7,000 workers became union members in Myanmar. And that’s just in the past year. Over two decades you helped so many workers get dignity and better lives.”

Rep. Karen Bass, who introduced the honored guests, has worked with the Solidarity Center in her role as Ranking Member of the Subcommittee on Africa, Global Health, Global Human Rights and International Organizations of the House Committee on Foreign Affairs, where she brings a powerful voice to democracy, human rights and governance on the African continent and beyond.

Before introducing the honored guests, Bass noted that she had “seen firsthand how the Solidarity Center’s projects around the world strengthens workers’ voices and enables working people to defend their civil rights to build stronger and more responsive democracies.”

Angel Miguel Conde Tapia, a Colombian palm oil worker and union leader who accepted the Solidarity Center honor on behalf of the Colombian trade union movement, described how he and his co-workers struggled for years to form a union and win bargaining rights.

“Every advance has to be won by organizing, protests and legal actions,” he said, “and always while confronting threats and violence.” Twelve labor activists were assassinated as they sought to form unions, and Conde nearly lost his life when a gunman’s weapon failed to fire at him.

Evangelina Argüeta Chinchilla, who has been instrumental in helping Honduran garment workers form unions and win contracts, accepted the honor on behalf of garment workers and their unions, which are negotiating eight landmark collective bargaining agreements covering 21,000 garment workers.

“To employers and the government, we made it clear that the workers, especially those from the garment and textile industry, were not playing,” she said. “The workers have less fear in organizing. Our organizing growth speaks for itself.”

From Colombia, Leonila Murillo accepted the honor for the Buenaventura community, where Afro-Colombians took to the streets for 22 days in May demanding peace and dignity after years of neglect by the national government. Many of the port city’s 400,000 predominately Afro-Colombian inhabitants live in abject poverty without access to proper hospitals, schools, roads and other basic services. On June 6, the government agreed to invest more than $500 million in the long-neglected city over the next decade.

20 Years in Forefront of the Global Fight for Workers’ Rights

Earlier in the evening, U.S. Rep. Sander Levin joined participants, and described his experience talking with Bangladesh garment workers who told him they were forced to work in the unsafe Rana Plaza building or lose their jobs. The building collapsed the next day, killing more than 1,100 workers and injuring thousands more.

U.S. Rep. James McGovern, who was unable to attend, sent remarks in which he said he applauds and admires everyone at Solidarity Center “who, day in and day out, provide these workers with support, technical and legal assistance, and who are often the only people getting the word out about these workers’ struggles.” Read his full statement here and see greetings from unions around the world here.

“We’ve seen successes, but we’re not there yet,” said Bader-Blau. “Until farmworkers and garment workers, retail and construction, domestic workers and heroes of our health and education sectors and all workers can be certain they will receive fair wages, a voice in their democracies, work in safe environments and never have to fear a sexual assault on the job, the Solidarity Center will be there.

“But here’s what we know. It takes more than skills, more than a commitment to a struggle and a willingness to fight. It takes joy. It takes love.  It takes conviction, and it takes power.

“And when I stand here in this room with all of you, all of US together—I  feel the unstoppable, beautiful power of solidarity.”

The Solidarity Center thanks the many sponsors of the event.