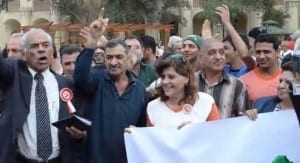 The Iraqi Parliament is currently voting on a new labor law after union members waged protests around the country in recent days urging lawmakers to act on the bill. The vote been rescheduled several times.

In a statement, Iraq union federations said that although the law under debate does not go as far as unionists sought in areas such as collective bargaining and organizing, it covers many points the Saddam-era law does not. For instance, the law would ban discrimination and forced labor and would add protections for working women and the right to strike.

Read the full statement in English and Arabic.

Watch a video of one of the protests.