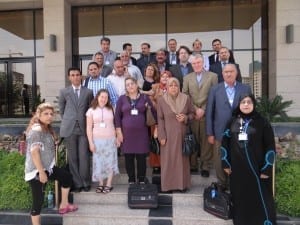 On Friday, Iraqi union leaders expressed their concerns to members of Parliament at a Solidarity Center-sponsored conference, and union leaders have written a letter to the Speaker of Parliament in which they detail the proposed law’s shortcomings. Read the letter in English and Arabic. The AFL-CIO also has written to the Speaker of Parliament expressing “deep disappointment” that the proposed legislation “contains several provisions that violate international standards.” Read the AFL-CIO letter.

January 10, 2014—The Iraqi Parliament is currently debating legislation that for the first time could contain worker rights protections in line with core labor standards, including freedom of association. The law would replace the 1987 labor law passed by Saddam Hussein’s regime.

The vote comes nearly a decade after the Inetrnational Labor Organization (ILO) first worked with the government of Iraq to draft new legislation. The ILO commented on drafts in 2007 and 2012, finding them severely inadequate in regards to protecting the rights of workers, in particular freedom of association.

Six major Iraqi labor unions, together with the Solidarity Center, have worked since June 2012 to bring proposed changes to the nation’s draft labor law in line with International Labor Organization (ILO) conventions. In addition, the Solidarity Center facilitated meetings among the unions and the labor committee in parliament, the Iraqi Ministry of Labor and Social Affairs, and the International Trade Union Confederation (ITUC) and the ILO, which provided recommendations based on ILO conventions. The labor federations launched a public advocacy campaign for passage of the labor law, and have received strong support from the global labor movement, including global union federations, the AFL-CIO and the British Trade Union Congress (TUC).

On a parallel front, a new union law that would replace the 1987 Trade Union Law had its first reading in Parliament this week. The 1987 Trade Union Law bans public-sector unions, which include the majority of Iraqi workers, restricts union pluralism and allows government interference in internal union affairs.

The Solidarity Center has worked closely with the Iraqi labor movement to secure passage of the new trade union law that protects freedom of association for all workers. Parliament plans to hold its second reading before the end of January, after which Iraqi unions will advocate for Parliament to vote on it before the current session ends in April.