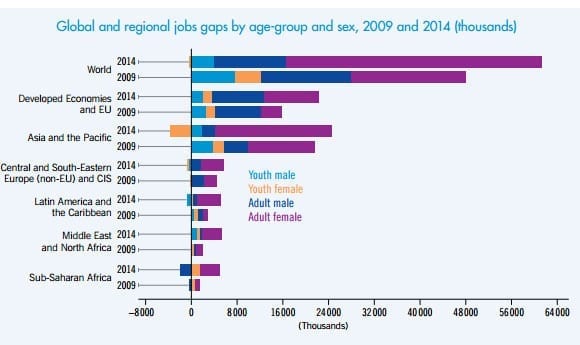 More than 60 percent of workers worldwide, predominantly women, are in temporary, part-time or short-term jobs in which wages are falling, a growing trend that is fueling global income inequality and poverty, according to an International Labor Organization (ILO) report released today.

“This report reveals a shift away from the standard employment model, in which workers earn wages and salaries in a dependent employment relationship vis-à-vis their employers, have stable jobs and work full time,” the report states. Further, “labor incomes constitute the main source of income inequality.”

Although the incomes of permanent workers are relatively stable, the percentage of such workers is declining globally—and as few as 20 percent of workers are in permanent jobs in regions such as sub-Saharan Africa and South Asia. Many of these precarious jobs are in the informal economy, which includes market vendors, day laborers, pedicab drivers and domestic workers. In fact, domestic workers, most of whom are women, represent 3.6 percent of wage employment worldwide, the report says.

“World Employment and Social Outlook: The Changing Nature of Jobs” cites a shortage in global aggregate demand as a potentially key factor in explaining the slow growth of decent jobs, which has created a global jobs gap that costs an estimated $1.218 trillion in lost wages for workers around the world. The ILO estimates that 201 million women and men were out of work in 2014, more than 30 million higher than before the start of the 2008 global economic crisis.

“A vicious circle may be at work, with lower demand affecting output and employment, thereby further depressing demand,” the report states. In other words, fewer jobs and lower wages mean workers and their families will be able to purchase less, and so fewer jobs will be created and low-pay will be the norm, a vicious cycle that can only be broken by large-scale job creation and incomes that sustain working people and their families.

Workers making low pay are less likely to be union members or to benefit from collective bargaining, according to the report. Further, despite widespread unemployment, in particular among women, there is very limited social protection for unemployed working-age adults. The report recommends policy changes that address the transformation in employment structures and include the growing numbers of precarious workers in social protection systems.

The report also notes that approximately 1 in 5 workers contribute to global supply chains, which “facilitates transitions to the formal economy and waged employment for many workers.” However, the study equally highlights that the vast majority of employment in the global supply chain takes place under poor working conditions. This is particularly the case for vulnerable workers, such as unskilled women, youth and migrant workers.