Uzbek labor rights activist Dimitry Tikhonov says his home office has been burned and all the equipment and documentation he collected on Uzbekistan’s use of forced labor in the country’s cotton harvests has been destroyed. No other room in his home was touched by the fire, he says. 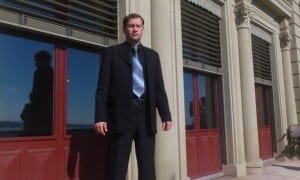 “All papers and files containing materials from my human rights work, including forced labor, were completely burned,” he says. “My entire legal library, which I have collected over years, is completely destroyed.”

Tikhonov says the fire occurred October 20, when he was away from his home in Angren, a city near the capital, Tashkent. He reported the incident after he returned. A metal box in which he kept a backup computer hard drive was intact, but the hard drive was missing from the case. Some 100 copies of a legal guide on child labor and forced labor that he created also disappeared, although they were in a room untouched by the fire.

In late September, Tikhonov was arrested and beaten by police as he took photos of some 20 busloads of teachers and school employees forced into the cotton fields for the annual harvest.

Doctors brought in to examine Tikhonov said he had no injuries, and police officers told Tikhonov to sign a statement attesting that he had no complaints about the police. Tikhonov refused and eventually was released.

Each harvest season, the Uzbek government mobilizes more than 1 million residents to pick cotton through systematic coercion. From September through October, many classrooms close because teachers are among those forced to pick cotton. Health clinics and hospitals are unable to function fully as their health workers are toiling in the fields.

This year, the government of Uzbekistan is expected to make $1 billion in profit from cotton sales, money that disappears into an extra-budgetary fund in the Finance Ministry to which only the highest-level officials have access, according to the Uzbek-German Forum report

The World Bank has pledged more than $450 million to Uzbekistan, mostly for modernization of agriculture, and has committed to pull out the loans if forced labor is used in project areas. But despite widespread detailed reports of ongoing forced labor in this year’s cotton harvest, the World Bank has not withdrawn its extensive funding.