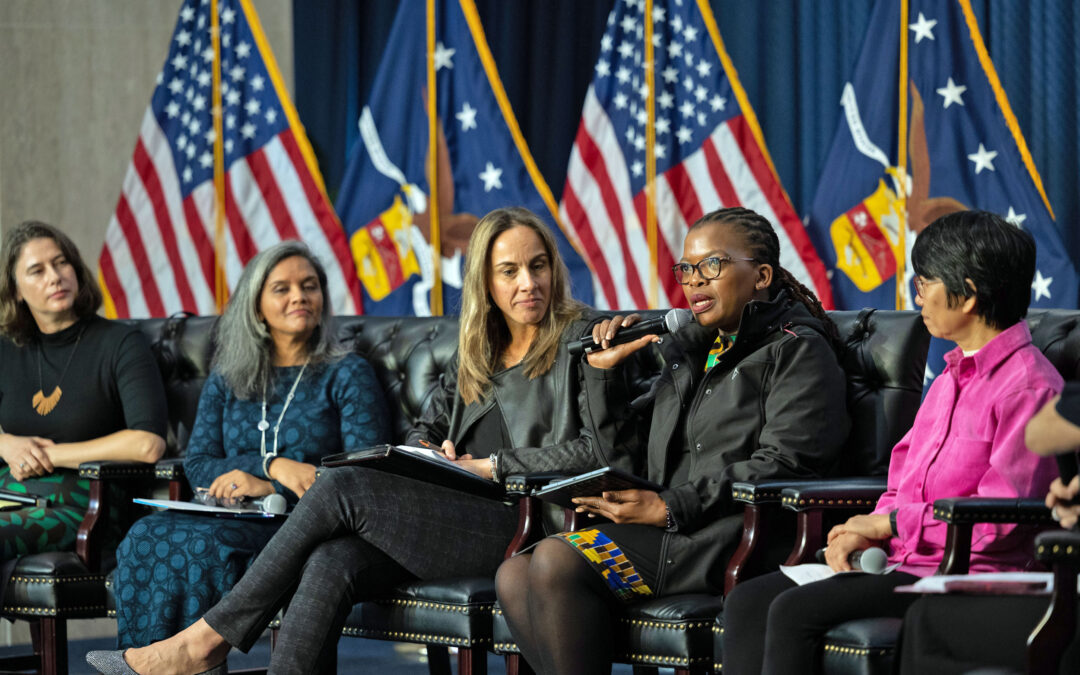 In a powerful demonstration of support for strengthening worker rights to ensure thriving democracies and prosperous economies, representatives from governments, unions and philanthropic organizations met in Washington, D.C., yesterday to renew their commitment to the global initiative, M-POWER (Multilateral Partnership for Organizing, Worker Empowerment, and Rights). 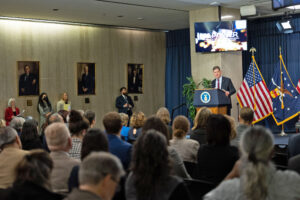 Launched in December 2021, M-POWER is part of the U.S. Presidential Initiative for Democratic Renewal involving a partnership of governments, global and national labor organizations, philanthropic institutions and civil society stakeholders cooperating to advance freedom of association and collective bargaining in the global economy through actions such as standing up for and standing with labor activists and worker organizations under threat.

“When workers have a seat at the table, trade unions can advocate for better protections, better wages better and better laws that protect them,” said USAID Director Samantha Power. Speaking via recorded video, Power said USAID is contributing $25 million to the initiative, which, at $130 million, is the largest the U.S. government has made to advance worker rights globally.

“The M-POWER initiative lifts up the voice of workers who are fighting on the front lines for democracy,” said Cathy Feingold, deputy president of the International Trade Union Confederation (ITUC) which, along with the U.S. Labor Department, is M-POWER co-chair. The initiative creates “the power to shape policies that affect workers and their environment. Protecting that power has never been more important,” she said, citing examples of brutal government attacks on workers and their unions in countries such as Belarus. Feingold also is AFL-CIO International director.

Another country where workers have been under brutal assault is Myanmar, following a government takeover by a military junta in February 2021. Speaking from outside the country in one of several video clips of workers shown throughout the event, Khaing Zar Aung, president of the Industrial Workers Federation of Myanmar (IWFM), said “freedom of association is very important for Myanmar, for workers.

“If we don’t have freedom of association, we cannot organize and hear the voice of the workers.” 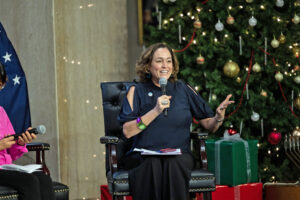 Leaders of global unions and representatives of the U.S. government and philanthropic organizations turned to concrete examples of worker power in the panel, “Commitment to Action: the M-POWER Agenda for Worker Empowerment.”

“While human rights has long been considered a bedrock of democracy, worker rights has not received credit for the part it plays in ensuring more democratic societies,” said Solidarity Center Executive Director Shawna Bader-Blau, panel moderator.

Zingiswa Losi, president of the Congress of South African Trade Unions (COSATU), shared the union’s efforts for adoption of Convention 190, the International Labor Organization (ILO) treaty to end gender-based violence and harassment at work, and its successful efforts to push the South African government to ratify it.

“We strongly believe if we are to transform the workplace, we must ensure that when women go to work, women must be empowered equally as men,” she said. Losi discussed how South African unions work with government and business to improve worker rights, a model like M-POWER in which “through collaboration, we can meet challenges.” COSATU is a long-time Solidarity Center partner.

Tang outlined how domestic workers came together from around the world to create IDWF, which has grown from tens of thousands of members to some 650,000 in the past 10 years. This experience showed that workers having “a seat at the table is vital to see worker rights advancement,” a goal M-POWER has made central to its outreach.

Sarita Gupta, vice president of the Ford Foundation, said combing philanthropic work with government resources was essential given the growing threats to the right of freedom of association and collective bargaining. “Achieving change at scale is impossible without the government,” she said.

Ford is among philanthropic organizations working together through FORGE, Funders Organized for Rights in the Global Economy, to support worker rights. “We have long known that democracy is incomplete if workers lack a say in their workplace,” Gupta said. “Worker voice is democracy.”

Erin Barclay, senior bureau official in the U.S. State Department’s Democracy, Human Rights and Labor division, said the appointment last week of Kelly Fay Rodriguez as special representative for International Labor Affairs was among the commitments the U.S. government has made in its global labor rights efforts. Rodriguez’s experience working in the international labor movement includes the Solidarity Center.

The initiative also includes an urgent action component to protect labor activists and organizations facing threats, because the variety of threats workers face mean they are most effectively addressed by a “diversity of tools,” said Molly McCoy, U.S. Labor Department assistant deputy undersecretary of international affairs.

AFT President Randi Weingarten, whose U.S.-based teachers’ union has long been committed to advancing global labor rights, put it this way: “Our responsibility as a global labor movement is to do more than speak, it is to act” to defend “fundamental rights like the right of association, like the right to collectively bargain.”

Labor ministers from Argentina and Canada joined the event to highlight how their governments are supporting and enhancing worker rights. Their countries are among Germany South Africa and Spain taking part in the initiative.