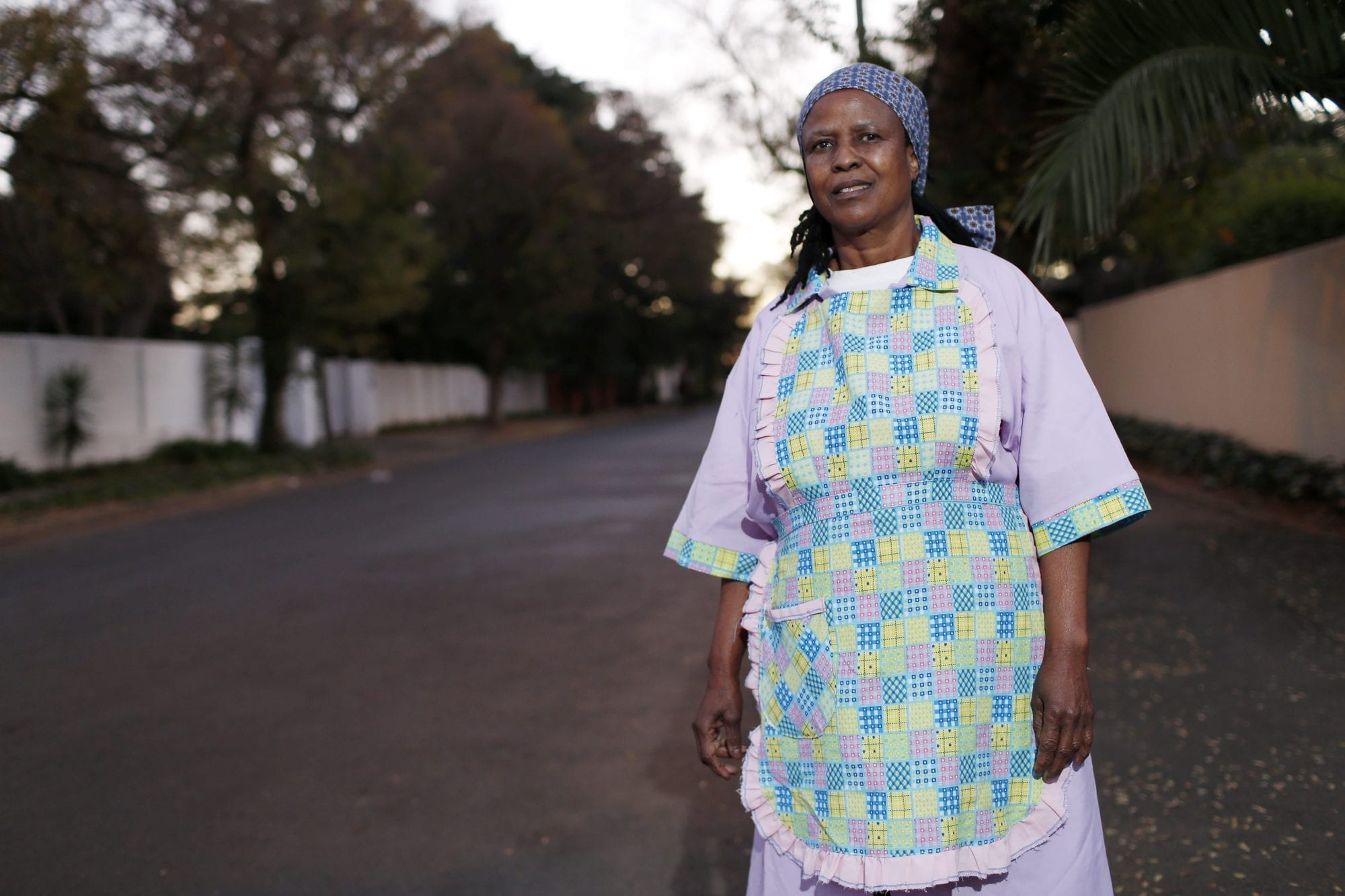 Domestic workers like Salome Molefe now have workplace safety and health coverage through the efforts of SADSAWU with support from the Solidarity Center. Credit: Solidarity Center / Jemal Countess

In an historic judgment, the South African Constitutional Court in mid-November recognized that injury and illness arising from work as a domestic worker in a private home is no different to that occurring in other workplaces and equally deserving of compensation. Beyond recognizing occupational hazards in the home, the decision also recognized the broader harm wrought by the invisibility of gendered, racialized work in the privacy of homes in the context of post-colonial and post-apartheid South Africa.

In the case of Mahlangu and Another v Minister of Labor and Others, the South African Domestic Service and Allied Workers Union (SADSAWU), with support from the Solidarity Center, challenged the constitutionality of provisions of the Compensation for Occupational Injury and Illness Act (COIDA), which precludes domestic workers employed in private homes from making claims to the Compensation Fund in cases of illness, injury, disablement or death at work. The Constitutional Court agreed that this exclusion violates rights to social security, equality and dignity, and it made this finding retroactively applicable from 1994, the date the South African constitution was enacted. In so doing, the court articulated a theory of intersectional discrimination and moved forward its own jurisprudence on indirect discrimination, infusing the right to social security, dignity and retrospective application with an intersectional analysis. It also reframed the narrative on domestic workers: no longer invisible but “unsung heroines in this country and globally”(paragraph 1).

The judgment gives a central role to international law, and establishes that “in assessing discrimination against a group or class of women of this magnitude that a broad national and international approach be adopted in the discourse affecting domestic workers“(Paragraph 42). It continues that, under international law conventions, including the International Covenant on Economic, Social and Cultural Rights (ICESCR), the exclusion of domestic workers from COIDA is inexplicable.

The court found that COIDA is a form of social security because the inability to work or the loss of a breadwinner’s support as a result of the COIDA exclusion, traps domestic workers and their dependents in cycles of poverty. According to the court this exclusion is unreasonable because it did not take into account the needs of the most vulnerable members of society, particularly those who experience compounded vulnerabilities arising from intersecting maltreatment based on race, sex, gender and/or class. It concludes that there is no legitimate objective to the exclusion, rather it entrenches patterns of disadvantage.

The court took the opportunity to enunciate a theory of intersectionality, which considers the social structures that shape the experience of marginalization, and the convergence of sexism, racism and class stratification. Viewed historically, the racial hierarchy established by apartheid, placed Black women at the bottom of the social hierarchy and relegated them to low-skilled and low-paid sectors of the workforce, such as domestic work. This sector was and is predominated by Black women and remains the third largest employer of women in South Africa. Yet it continues to be characterized by poverty-level salaries and poor living conditions, in which domestic workers are deprived of their own family while caring for that of their employers. As a result, the court found that domestic workers are a “critically vulnerable group of workers,” declaring the COIDA exclusion invalid both at an individual and group level (paragraph 106).

The case centers on Maria Mahlangu, who was employed as a domestic worker in a private house for 22 years. According to her family, she was partially blind and could not swim. In March 2012 while at work, she fell into her employer’s swimming pool and drowned. When Mahlangu’s dependent daughter approached the Department of Labor for compensation, she was told that she was precluded from doing so under COIDA. Then SADSAWU organizer Pinky Mashiane read about the incident in a newspaper and approached the family to see how she could assist.

In 2013, the Solidarity Center embarked on a research project under a USAID grant to examine domestic workers’ socioeconomic rights in South Africa, which culminated in a list of domestic worker issues requiring urgent law reform. At the top of this list was inclusion of domestic workers in COIDA. Indeed, the issue had been on the agenda since 2001, without legislative reform being passed.

At the same time the Solidarity Center was looking for a litigant to challenge COIDA’s constitutionality. Pinky Mashiane—after having been turned down by multiple lawyers and law centers—was looking for a remedy to assist Mahlangu’s family. The Solidarity Center approached lawyers in South Africa as well as SADSAWU leadership with the proposal to litigate this case in constitutional terms, with financial support. Beginning in 2015, the case wound its way through the South African court system, litigated before the Constitutional Court by lawyers from the Social and Economic Rights Institute (SERI).

The case benefited from sustained advocacy at global and local levels. In 2019 , the Solidarity Center and partners brought the issue of domestic workers’ exclusion from COIDA before the United Nations Committee on Economic, Social and Cultural Rights, which was considering South Africa’s compliance with treaty obligations. In its concluding observations, cited in the Constitutional Court’s decision, the Committee recommended that South Africa include domestic workers in COIDA. Similarly, in the early stages of litigation, the amicus, the Gender Commission of South Africa, expressed frustration at the almost complete absence of information on the types of injuries and illnesses arising in the context of domestic work in private homes. To fill this vacuum, Solidarity Center commissioned qualitative research consisting of in-depth interviews with domestic workers around the country, describing the types of injury and illness occurring in the context of the home. After the COVID-19 pandemic broke out, which had severe consequences for domestic workers, domestic worker unions and partners also put together a petition to try and propel the legislature to include domestic workers in COIDA. Most significantly, at each of the numerous court hearings, the domestic worker unions and groups maintained a constant presence at the court, and in the media, insisting that the death of Maria Mahlangu not be in vain.

When Solidarity Center initially proposed constitutional impact litigation on COIDA, it was with the hope that a successful outcome in this case would serve three purposes: obtain much-needed relief for domestic workers who were outside of COIDA’s purview; strengthen domestic worker unions; and create an important precedent that would lay the foundation for jurisprudence on domestic workers that could serve as a global marker.

The Mahlangu decision will clearly achieve the first as it removes the legal obstacle to domestic workers claiming compensation, with immediate and retrospective effect. Meanwhile, the long road to Mahlangu has also strengthened a growing coalition of unions and NGOs that have articulated their claims effectively in all forms of media. The fact that after 26 years of democracy, Mahlangu is the first case brought by the domestic worker union to the apex court of South Africa and guardian of constitutional values is a significant milestone.

Yet, perhaps the greatest import of Mahlangu might lie both in its precedent and in the paradigm it establishes to conceptualize domestic work. Using international human rights norms as a reference point, the court sets up an approach on domestic workers as a category, which stands to benefit domestic workers in South Africa and beyond. It also reasserts the goals of transformative constitutionalism as “undoing gendered and racialized poverty” and insists that an intersectional and historic lens is essential to the achievement of structural and systematic transformation. Indeed, the adoption of a historical lens allows the Court to reframe the narrative of domestic workers and their place in South Africa’s constitutional democracy: no longer powerless and invisible, but foundational toSouth Africa’s constitutional project. This reframing is captured eloquently in the concurring judgment of Justice Mhlantla who asserts that these Black women are smart, creative and survivors; who frequently work in environments that are emotionally and physically challenging, and which carry vestiges of South Africa’s colonial and apartheid past. She concludes: “On the contrary, they have a voice,” and according to Justice Mhlanthla J (paragraph 195) as well as the substance of majority judgment, the Constitutional Court is “listening.”