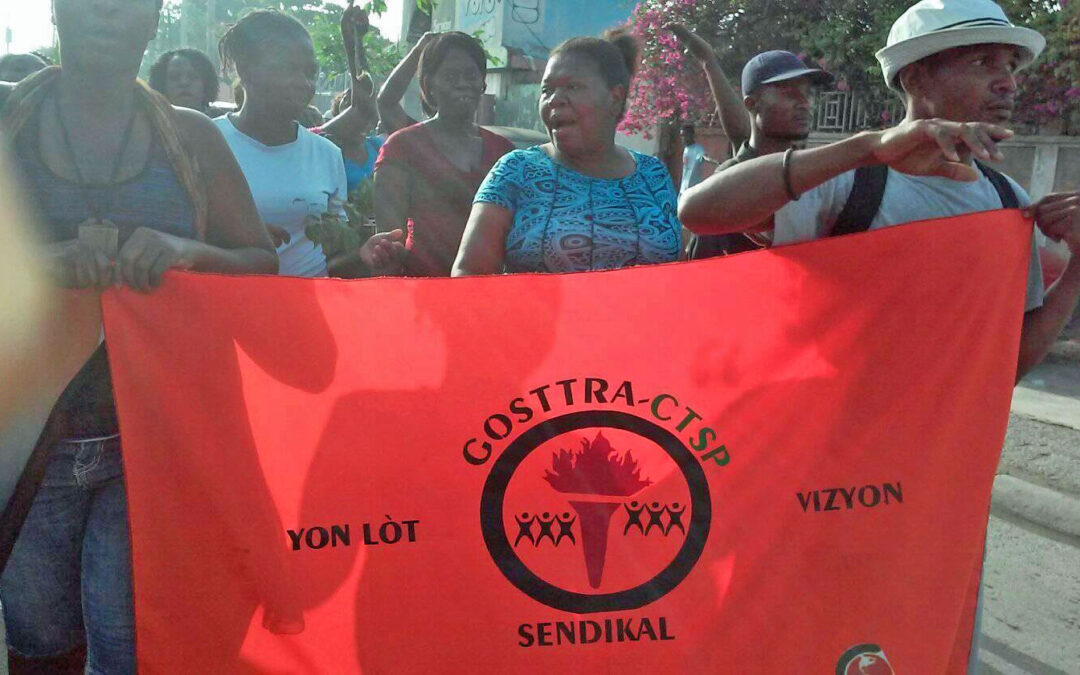 Garment workers and their union in Haiti are hailing a landmark settlement with a factory in Port-au-Prince that provided a total of $15,480 in back pay to 1,200 workers. The compensation covers 20 percent of the amount the employer deducted from workers’ paychecks for health care coverage by the government agency, OFATMA, but failed to pay to the agency. Haitian law requires employers to register workers in the system, deduct six percent of pay (split between employer and employee), and forward the contribution to OFATMA in a timely fashion.

The settlement follows the death of Liunel Pierre, a garment worker, who died in July 2020 after being denied life-sustaining dialysis treatment due to a lack of accrued health care funds.

After Pierre’s death, the Association of Textile Workers Unions for Re-importation (GOSTTRA)  demanded the employer immediately remedy its failure to contribute to workers’ health insurance. After a weeks-long work stoppage, GOSTTRA members successfully brought management to the table. The settlement also covers many workers laid off during the pandemic and GOSTTRA is working with the employer to establish processes to contact the laid-off workers so they can receive the reimbursement.

Union advocates say this is the first time a Haitian garment sector union successfully negotiated a financial settlement agreement on behalf of workers and is holding the employer accountable without international or fashion brand intervention.

With Solidarity Center support, GOSTTRA printed fliers to publicize the settlement among workers that detailed the payment they should receive, accompanied by megaphone announcements at the factory. GOSTTRA is monitoring management’s action to ensure it  correctly reimburses the workers.

Few factories in Haiti make the required contributions to the health or pension funds in accordance with the law, threatening the ability of workers to access health care. The International Labor Organization (ILO)’s Better Work Haiti (BWH) has reported continuous and widespread noncompliance for 10 years. In its most recent report, BWH found that 84 percent of employers did not comply with legal requirements for social benefits between October 2019 and September 2020.

In the same month as Pierre’s death, another garment worker, Sandra René, died from pregnancy complications after she also was turned away from the hospital where she sought medical care. As in Pierre’s case, the factory had deducted funds from her paycheck for health coverage, but failed to consistently pay into the system. Hundreds of garment workers marched with René’s casket in a funeral procession to OFATMA offices to protest her death.

GOSTTRA’s success comes as Haiti’s textile industry struggles to recover from diminished demand during the COVID-19 crisis. Workers still face layoffs and reduced working hours, with roughly a third of the 57,000 workers in the country’s garment industry suspended or terminated. Increasing violence in the country threatens workers’ ability to safely travel to work, further disrupting factory operations. Further, employers are clamping down on GOSTTRA union leaders who are trying to defend their members’ interests.

The victory also comes in an environment in which Haitians face increasing gang violence, kidnappings, and political polarization. Few elected officials remain, following the President Jovenel Moise’s dismissal of the lower Chamber of Deputies and mayors across the country. Thousands have marched to protest widespread assaults on the country’s democratic processes, and journalists and others taking part have been targeted by arrests and police violence. Last month, police fired tear gas into a church where Haitian bishops led a “Mass for the freedom of Haiti.”