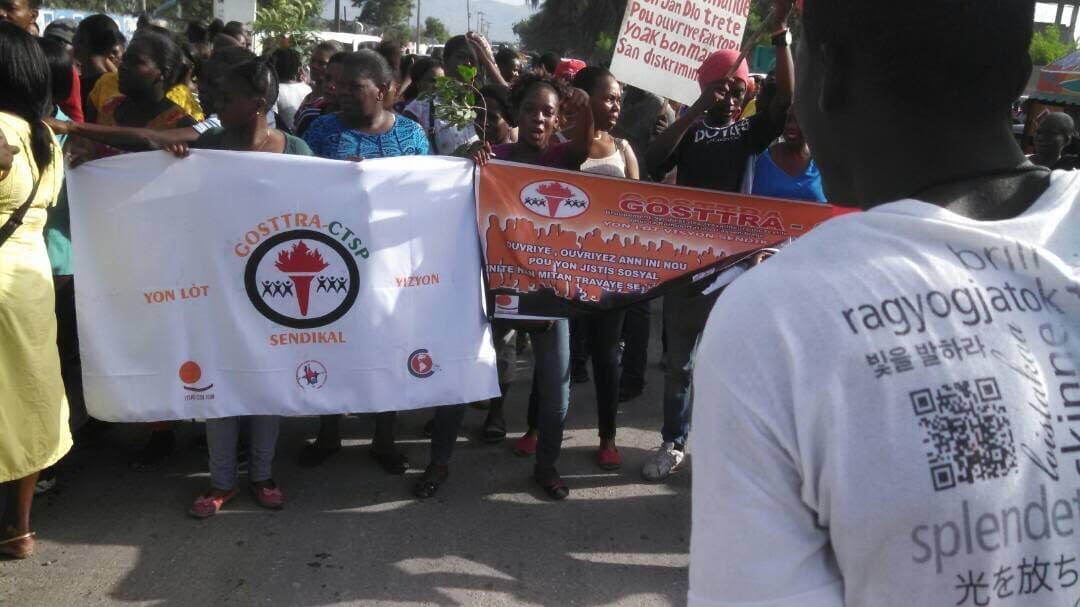 Update: On July 27, the Haitian government announced a slight minimum wage increase for garment workers that fall far below workers’ demands for a wage that would enable them to support their families. The minimum wage will rise by 81 cents a day, to $5.73. Union members plan to launch a week-long strike on Monday.

Thousands of garment workers in Haiti took to the streets this month  to demand an increase in the sectorwide minimum wage that leaves most workers unable to cover bare necessities.

The current daily minimum wage is 300 Haitian gourdes, or $4.70. Garment workers are demanding that the minimum wage be increased to 800 gourdes, or about $12.70 a day. In 2014, before the devaluation of the Haitian currency and the onset of double-digit inflation, the Solidarity Center found that a real living wage for Haitian workers would be at least $23 a day.

Unions are calling on employers to respect workers’ rights to freedom of association, citing numerous instances when workers who tried to form organizations to represent their interests were terminated, threatened or blacklisted. Approximately 45 union leaders from GOSTTRA who were fired in the midst of the May demonstrations remain out of work.

The tripartite Superior Council of Wages (CSS), which includes only two labor representatives and is tasked with providing Haiti’s executive branch with a recommendation for wage increases, issued its latest report on July 10. In the report, the CSS recommends that the daily minimum wage increase a mere 35 gourdes, or 55 cents, citing the need to keep Haiti competitive as the nation seeks to attract more employers in the sector.

Workers are, not surprisingly, outraged by the recommendation of the CSS. They also disagree with the suggestion that the wage increase be implemented in August without retroactive pay to May, as has been the custom in prior years.

Employer representatives, namely the Association of Industries of Haiti (ADIH), have continued to express a desire to offer only minimal wage increases to keep Haiti as a low-wage destination for global brands.  In late June, six companies wrote to Prime Minister Jack Guy Lafontant to demand that the government intervene and quell worker protests related to the minimum wage. As the situation continues to escalate, the focus shifts to President Jovenel Moise and the executive branch. The presidential decree on the minimum wage is expected to be released in the near future.