Gender Equality: The Unfinished Business of the Labor Movement 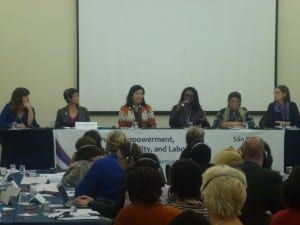 Women at every level are “moving the labor movement in new directions” and “inventing new kinds of worker organizations and new ways of being a trade unionist,” says labor historian Dorothy Sue Cobble.

Cobble, distinguished professor of history and labor studies at Rutgers University, was among several speakers opening a two-day Solidarity Center conference this morning, “Women’s Empowerment, Gender Equality and Labor Rights: Transforming the Terrain.” Nearly 100 labor and community activists from 20 countries are gathered here in São Paulo, Brazil, to share strategies for achieving gender equality and worker rights in their unions and their workplaces.

Gender equality is the “unfinished business of the labor movement,” said Solidarity Center Executive Director Shawna Bader-Blau in conference’s keynote speech. “The strategic exploitation of women workers for the economic gain of business is one of the key global dynamics driving down wages and working conditions, and keeping working people from their rights across the globe.

“If we want to stem the unrelenting race to the bottom, we must fight for workers at the bottom of the supply chain, starting with the women,” she said.

“We have fought very hard, we Brazilian women, to take up the spaces of power,” said Maria Auxiliadora dos Santos, women’s secretary at Forca Sindical. “We have to say, `Men will not speak in our name.’” More than 100 million women live in Brazil, yet they hold only 13.7 percent of executive positions and are only 22 percent of managment, dos Santos said. But over the past 10 years, the governing Worker’s Party has enabled women to make tremendous gains because of the the focus on alleviating poverty and improving the economic rights of workers.

Gertrude Mtsweni, national gender coordinator for the Congress of South African Trade Unions (COSATU), shared how women unionists pushed for creation of a full-time gender coordinator position and gender coordinator chairpersons throughout COSATU. “A conscious effort was made to build an active gender structure,” Mtsweni said. The federation also integrates gender issues in collective bargaining and wages campaigns on a variety of issues crucial for women, including prevention of workplace sexual harassment and violence and creation of child care facilities.

Sally Choi, project coordinator for the Hong Kong Confederation of Trade Unions (HKCTU) on China and International Affairs, discussed HKCTU`s recent victory in moving the government toward improving the nation’s workplace sexual harassment laws, so that women in service and retail jobs are covered. An organizer and researcher, Choi has coordinated gender and labor programs in mainland China and has been active in the local women’s movement in Hong Kong, Special Administrative Region of China for 10 years.

As Cobble summed up the conference goal: “Our challenge over the next two days is to think about how to sustain these new efforts, to learn from and spread their wisdom, to capture their stories and let the world know that labor women will not and are not being silenced.”