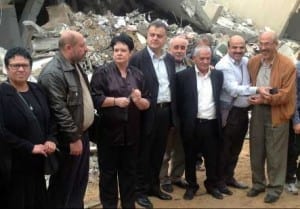 ITF-affiliated bus drivers in Gaza are among workers affected by the current conflict. Credit: ITF

On an ordinary working day, activists from the Palestinian General Federation of Trade Unions (PGFTU)-Gaza conduct labor rights education and outreach to worksites around Gaza. In the past six months, Organizing Department Head Ahmad Hillis and other union officials have visited more than 180 workplaces including hospitals, pharmacies, universities and construction sites. (Arabic version of this article here.)

Through one-one-one conversations, the organizers have documented exchanges with 234 workers and informally registered 54 new union members. (PGFTU-Gaza is not currently able to maintain offices or collect membership fees.)

Today, as the fighting rages, the union’s outreach work is different. Trade unionists spend their days checking on other families and injured persons, talking with employees and owners of razed workplaces, trying to provide assistance where they can and helping to get people to United Nations agencies and aid organizations, where they can receive lifesaving and other assistance.

In coordination with PGFTU sisters and brothers in the West Bank, and with Solidarity Center staff and colleagues from across the international labor movement, the PGFTU has worked tirelessly to develop the federation’s role as a representative civil society organization with a truly national reach.

The brave and peaceful work of these unionists serves a social movement for greater equality and respect for human rights.

The institutions of the international trade union movement have been speaking publicly about the ongoing Palestinian/Israeli conflict. For more information: