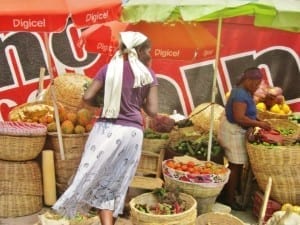 Despite a 45 percent increase in apparel exports since the 2010 earthquake in Haiti, the women and men who sew T-shirts and jeans primarily destined for the U.S. market barely earn enough to pay for their lunch and transportation to work, a new Solidarity Center survey finds.

The average cost of living for an export apparel worker in Port-au-Prince is 26,150 Haitian gourdes (about $607) per month. Yet workers are paid only between 200 gourdes (about $4.64) and 300 gourdes for an eight-hour day (about $6.96). After insurance and social security deductions, most export apparel workers must spend more than half of their salaries on transportation to and from the factory and a modest lunch, leaving little to sustain a family or keep a roof over their heads.

“Workers interviewed in this study had to forgo basic necessities given the disparity between their earned wages and the cost of living,” according to the report. “When asked what they would purchase if they had sufficient income, workers responded with: more food to feed their families, land to build a home, (and) a car or moped to drive their children to school.”

The Solidarity Center survey finds that a real living wage must be approximately 1,000 gourdes  (about $23) per day to enable workers to meet basic needs. Haitian unions are demanding a minimum wage increase to at least 500 gourdes (about $11.60) per day and assert that anything lower equates to starvation wages. Despite the export industry’s growth, Haitian law mandates a reduced minimum wage for the sector, which is the lowest in the Western Hemisphere.

Housing (rental) costs spiked immediately after the earthquake, but prices have since fallen by nearly 28 percent. Yet workers still live in substandard housing and pay up to four times more than what they did prior to the disaster. Some families are unable to afford their children’s transportation to school, so many students must walk, sometimes long distances and along busy roads.

“The High Cost of Low Wages in Haiti” analyzed such expense categories as housing, energy, nutrition, clothing, health care, education and transportation to classify the costs of an export apparel worker. The report also includes charts breaking down each category of expense. It follows a similar informal study the Solidarity Center conducted after the earthquake and used the same locally appropriate basket of goods to calculate the cost of living for a three-member household, comprised of one adult wage earner and two minor dependents (ages 8–14).

The report concludes: “Workers need access to decent jobs that pay a living wage and allow them to lead a dignified life. So long as jobs perpetuate worker exploitation and serve only as a means to fend off starvation, poverty will continue to grip the country and hinder the reconstruction process.”