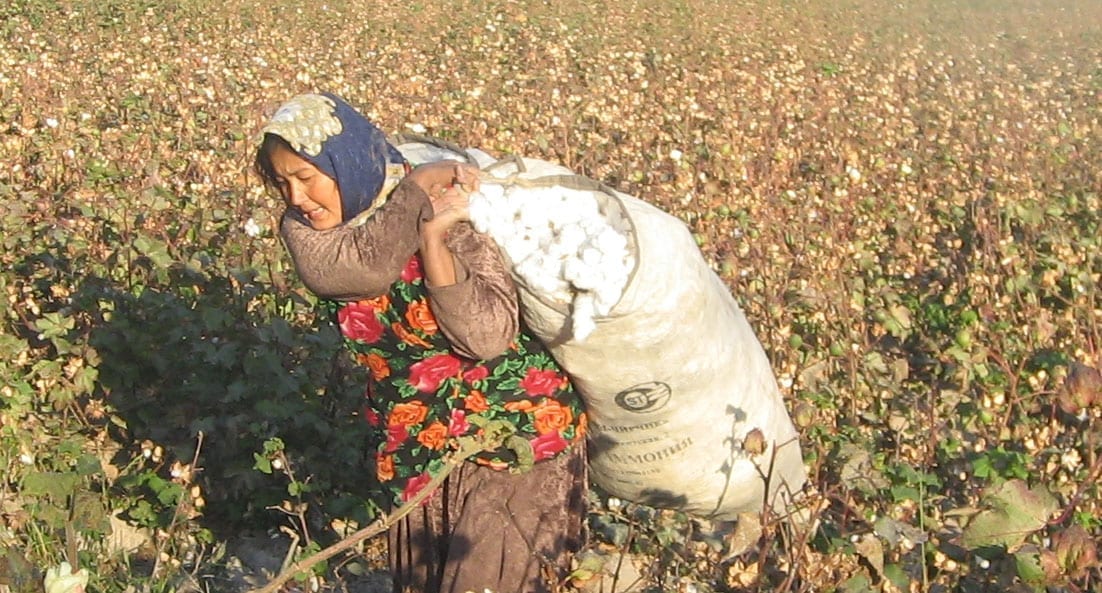 Health care workers in Uzbekistan are toiling in cotton fields and third- and fourth-year university students are now on their way as well, forced by the government to labor in the country’s fall harvest, according to stories compiled by the Uzbek-German Forum for Human Rights. The nonprofit organization also is highlighting news that minors again may be forced into picking cotton.

Each harvest season, the government mobilizes more than 1 million residents to pick cotton through systematic coercion, “with profits benefiting the government elite rather than the people,” according to a statement by the Cotton Campaign, a coalition of organizations that includes the Solidarity Center.

During the 2014 harvest, the government mobilized more public employees than in previous years, likely to make up for fewer child laborers, according to a 2015 Uzbek-German Forum report. Uzbekistan has cut back on the use of child labor in the cotton fields following worldwide condemnation.

From September through October, many classrooms shut down because teachers are among those forced to pick cotton. Health clinics and hospitals are unable to function fully with so many health care workers also toiling in the fields.

This year, the government of Uzbekistan is expected to make $1 billion in profit from cotton sales, money that disappears into an extra-budgetary fund in the Finance Ministry to which only the highest-level officials have access, according to the Uzbek-German Forum report.

At least 17 people died and numerous people were injured in last year’s cotton harvest due to poor or unsafe working and living conditions. Workers are forced to toil long hours often without access to clean drinking water and typically work without crucial safety and health gear, exposed to toxic pesticides and dangerous equipment.

“Food is not provided. Everyone must bring their own bread and tomatoes,” says one health care worker. “The cotton is very low. In the sand there are a lot of snakes.”

United Nations (UN) Secretary-General Ban Ki-moon said during a June visit to Uzbekistan that more must be done now to address “the mobilization of teachers, doctors and others in cotton harvesting, and prevent the maltreatment of prisoners.” Dozens of labor and human rights organizations, including the Solidarity Center, had sent a letter to Ban Ki-moon urging him to raise the issue of forced labor.