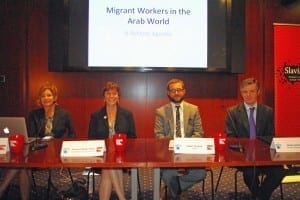 Migrant workers to the Arabian Gulf states are rarely covered by labor law and generally denied the ability to exercise fundamental human rights, including freedom of association, which makes them vulnerable to exploitation and abuse, said panelists at a standing-room-only Capitol Hill briefing Tuesday.

Migrant workers to countries such as Bahrain, Kuwait and Qatar endure a “triangle of oppression,” in which they pay steep fees to get a job, generally have their passports taken by employers once they arrive in country and then find they have no legal protection or recourse when they are abused, said Sarah Leah Whitson, executive director for the Middle East and North Africa Division of Human Rights Watch.

Whitson, who described the migrant worker experience as “akin to indentured servitude,” was one of four panelists at a Capitol Hill briefing this week, “Modern Day Slavery: Combating Migrant Labor Abuses and Ending Human Trafficking in the Gulf.”

Sponsored by the Solidarity Center and the Americans for Democracy and Human Rights in Bahrain (ADHRB), the panel was moderated by Solidarity Center Executive Director Shawna Bader-Blau, who noted the importance of shining “a light on migrant exploitation in the Gulf as part of the broader global fight against human trafficking and forced labor.” Other panelists were James Suzano, ADHRB legal officer, and James Lynch, researcher at Amnesty International London.

The panel was the second of two Capitol Hill events on July 8 highlighting the plight of the 90 million migrants who cross borders every year to work. In the Middle East, some 18.6 million migrant workers toil at jobs such as construction and domestic work.

Panelists repeatedly pointed to the brutality of the employer sponsorship system in Gulf countries “which emboldens employers to mistreat workers,” said Suzano. Known as kafala, the system requires foreign workers to have an employer sponsor, prevents workers from changing jobs without employer approval or judicial authorization, and deports workers who seek new employment or flee abusive conditions. Although most Gulf countries recently have enacted laws to address the abuses inherent in kafala, panelists noted that these laws are not enforced.

Further, said Lynch, it is impossible to “understand the vested interests” that perpetuate employer sponsorship programs in Gulf countries and around the world. Employers benefit from a captive workforce who cannot negotiate for better pay and working conditions—or report abuse to authorities. And often, corruption in governments may mean officials are working with labor recruiters.

Middle Eastern governments refuse to grant citizenship to migrants who have made the country their home for many years, denying them fundamental rights such as the freedom to join unions, bargain collectively and strike, several panelists said. In most Gulf countries, migrant workers comprise the vast majority of the working population, toiling particularly in difficult jobs such as construction and domestic service, yet are not even guaranteed a minimum wage.

As elsewhere around the world, migrants in the region are trafficked for what often turns out to be forced labor. “Human trafficking is much more prevalent than sex trafficking and it needs to be more comprehensively addressed,” said Suzano.

“Ultimately, said Bader-Blau, “the problem of human trafficking in the Gulf is a problem of migrant worker exploitation, and that is a problem of global governance of migration and a problem fundamentally of worker rights and human rights.