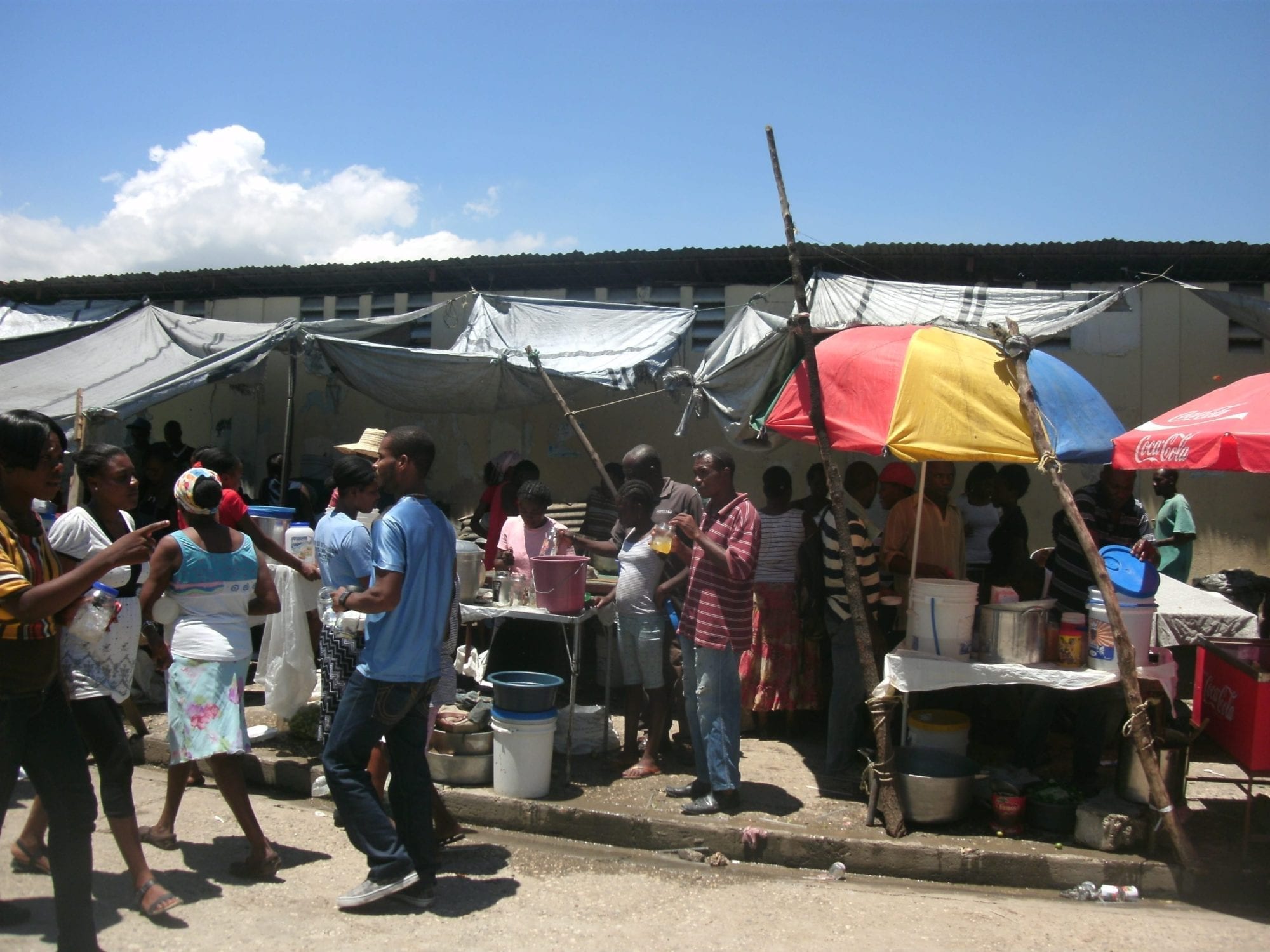 Five years after the catastrophic earthquake in Haiti, workers are still struggling to pay for transportation, food and housing, as the cost of living rises exponentially while wages fail to keep pace.

In recent discussions with export apparel workers in Port-au-Prince, Haiti’s capital, the Solidarity Center found that workers may pay nearly half their daily wage on two daily meals. Sending a child to school can absorb most of their monthly pay.

Elmerome, who makes T-shirts and is paid 225 Haitian gourdes ($4.81) per eight-hour day, says even though his wages have risen from 125 gourdes per day before the earthquake, food for himself and his child every day costs 500 gourdes, or more than twice his daily income. In 2013, he spent about 400 gourdes a day on food. Meanwhile, his child’s education costs run about 5,000 gourdes a month.

Like all workers whom the Solidarity Center interviewed, Elmerome is a member of a union, a factor he attributes to improving his working conditions. He says the Centrale National des Ouvriers Haïtiens (CNOHA) union has “helped fight against discrimination, suspensions and dismissals, and “gives workers a voice.” He sees freedom of association as the most important element for Haitian workers seeking to improve their working conditions. And echoing other factory workers interviewed, he says many workers fear joining a union because of employer harassment, including the threat of  being fired.

The Solidarity Center held these recent informal discussions as a follow-up to a study it conducted in 2014 to reassess the cost of living for export apparel workers in Port-au-Prince. “The High Cost of Low Wages in Haiti” concluded that, based on a standard 48-hour work week, Haitian workers should be paid at least 1,006 gourdes per day to adequately provide for themselves and their families. But like Elmerome, workers are generally paid between 225 gourdes (the minimum wage for export factories) and 300 gourdes a day or more if they are piece-rate workers. Further, the report says,

“Despite growth at the industry level, export apparel workers remain impoverished …. Companies that source from Haiti benefit from inexpensive labor costs, as well as lax enforcement of labor laws in an industry that is rife with worker rights abuses.”

Another factory worker, Widnise, told the Solidarity Center that she makes 225 gourdes a day and spends nearly half of that—110 gourdes each day—on food and transportation. Even with two people working in her household, she says, it is difficult to survive. Her rent is 20,000 gourdes a year.

In 2013, Haitian workers and their unions waged rallies and protests to demand that the daily minimum wage be increased to 500 gourdes for export apparel workers, but the government raised it to only 225 gourdes, effective last June.

Since then, Haitian unions have sought to secure improvements for workers through labor-employer discussions with the government on reforming the current labor code, boosting social protections and reviewing wage levels. The current labor code has not been updated in more than 28 years, and union leaders say stronger labor laws and improved social protections could go a long way to address many of the problems facing Haitian workers and their families.

In the apparel sector, Haitian unions are actively participating with employers in the Social Dialogue Table launched in early 2014. Haitian government representatives from the Ministry of Social Affairs and Labor Ministry participate as observers, along with other national and international organizations, including the Solidarity Center, the CTMO-HOPE Commission and the nonprofit, Better Work-Haiti. Union leaders say this process can potentially pave the way for improved workplace conditions, especially respect for worker rights.

“Our discussions with Haitian workers underscore a critical truth about the recovery effort: Subsistence wages have not helped workers surmount this disaster, much less allowed them to prepare for the next environmental or economic shock,” said Shawna Bader-Blau, Solidarity Center executive director. “For hardworking Haitians to live with dignity—and for Haiti to develop an economy that works for its people—fair wages are essential.”

The January 12, 2010, earthquake killed more than 200,000 Haitians and left another 1.5 million homeless. The disaster was followed by a string of tropical storms and a cholera epidemic that killed at least 8,000 people. Within days of the earthquake, the Solidarity Center dispatched regular truckloads of lifesaving emergency aid to Haiti from its field office in the neighboring Dominican Republic and carried out numerous aid and relief projects, together with allies like the American Federation of Teachers and TransAfrica. The report, “Workers Helping Workers Recover and Rebuild,” details the full range of the Solidarity Center’s multiyear relief and rebuilding effort in Haiti.