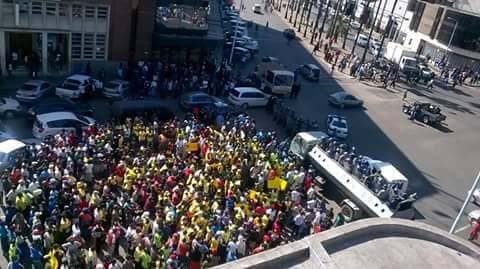 Street vendors in several Zimbabwean towns were evicted today, following a June 26 deadline to remove their stalls in the city centers and set up in government-approved areas. Government officials warned that force could be used if they refuse.

Local authorities evicted street vendors in the towns of Chivhu, Chinhoyi, Gwanda and Marondera, after vendors refused to relocate because there are not enough places for all of them, Malaya says.

Vendors are joining together to oppose the evictions and build strength to achieve fundamental labor rights through the association, whose membership has risen from 177,000 to more than 190,000 since the eviction campaign began.

Hundreds of street vendors took to the streets of Harare earlier this week to deliver a petition to Parliament against eviction orders. Street vendors in Harare today spilled out across the sidewalks and streets in defiance of the order.

“We hope the government will concede not to be brutal to the people so there is not punishment of the people who are trying to earn an honest living,” says Malaya. “(But) vendors are vowing to stay on the streets and take what must come.”

Vendors also face other challenges, he said. “Some of these places, especially in the major cities have been taken over by ‘barons’ who occupy the space and charge the vendors rent. They want to make money out of the people.”

With few formal sector jobs available in Zimbabwe—as in much of the world—the vast majority of the country’s nearly 15 million people are employed in the informal economy, and the number of street vendors is increasing exponentially.